Nayef Road started his four-year-old campaign in the best possible fashion when holding off his stablemate Mildenberger to win the Betway Sagaro Stakes at Newcastle at 8-1.

Both horses are now set to take their chance in the Gold Cup at Royal Ascot, where they will face Stradivarius, a horse who repeatedly frustrated Mark Johnston last season with Dee Ex Bee.

Nayef Road enjoyed a fruitful 2019, winning the Gordon Stakes at Goodwood and finishing third in the St Leger to Logician.

He looked an ideal candidate to make up into a top-class stayer this season, but was making his all-weather debut and coming up against classy sorts such as Withhold and Prince Of Arran.

Withhold attempted to make all, but Ben Curtis never let him get out of his sights and took up the running entering the final two furlongs.

Challengers came out of the pack, but Nayef Road - in typical style for one from his yard - stuck gamely to his task to win by three-quarters of a length from Mildenberger (4-1) and Prince Of Arran (11-1).

"He probably had the ideal campaign for a three-year-old last year if you were thinking of him making up into a top stayer," said assistant trainer Charlie Johnston.

"He won the Gordon Stakes, was second in the Bahrain Trophy, third in the Queen's Vase and third in the Leger.

"I was a little nervous as we'd done a lot of work with him in February and March with a view to going to Dubai and he was literally on the lorry when the meeting was abandoned.

"He then had an easy April and was only just ready in the last 10 days. Hopefully he'll come on from today."

He added: "I'd say the first two will both go for the Gold Cup. I don't think Mildenberger needs the all-weather, injury has meant he's missed the last two summers and he's run like he'll be suited by another half a mile, they both have really."

Champion all-weather rider Curtis said: "Everything went perfect, Nayef Road stays well and all went to plan. I got a lovely position from stall 10 and he travelled round beautifully. When I went for him he put the race to bed, it was an armchair ride for me."

Rewatch the fantastic Betway Sagaro Stakes (Group 3) won by NAYEF ROAD. Thanks to @AtTheRaces for the pictures. pic.twitter.com/CSeRdd6dSf

In different circumstances, Palace Pier (11-10 favourite) could have been running in the 2000 Guineas at Newmarket rather than the Betway Heed Your Hunch Handicap at Newcastle - and the manner of his victory suggests John Gosden will not be waiting too long for a major success with him.

Unbeaten in two outings last season, the son of Kingman had been prominent in the ante-post lists for the first Classic of the season, only to be ruled out a couple of weeks ago.

Gosden revealed a minor setback in the spring meant he had just missed some key work and that the Guineas would be too much of an ask first time out.

Instead he reappeared off a handicap mark of 98 and it is likely to be the last time his official rating is of any consequence given the turn of foot he showed.

Entering the final furlong he had two lengths to make up on Hugo Palmer's Acquitted, himself winner of two of his three runs last season, but when Robert Havlin asked his mount a serious question the response was electric and he shot three and a quarter lengths clear. 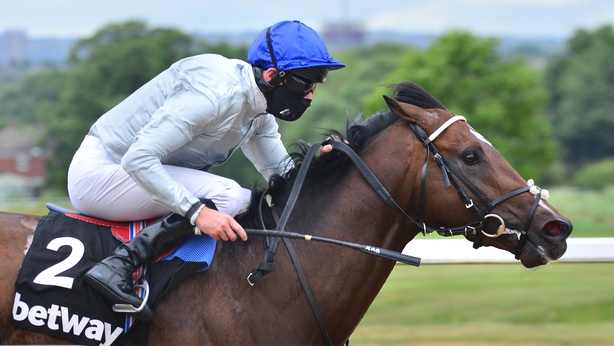 Assistant trainer Thady Gosden said: "That was very pleasing as the second is obviously a good horse, they like him a lot.

"He was fairly asleep for most of the race, but when he got the hang of it he picked up really nicely.

"It was a nice turn of foot he showed. He works nicely at home without being flash.

"Hopefully he'll improve for the run, that's why he is here and not Newmarket, also he's not really in the zone properly, hopefully that will have got him into the groove today.

"I'd imagine he'll be going into stakes races now, we'll see what the boss wants to do. Ascot does come very quick, it's an unusual year, obviously."