Tiger Roll remains on course to bid for a historic third successive win in the Randox Health Grand National at Aintree despite a recent setback.

The nine-year-old underwent a procedure to remove a chip in a joint earlier this month and is currently on box rest, but trainer Gordon Elliott is confident his star will attempt to join Red Rum as a triple winner of the extended four-and-a-quarter-mile event.

If his recovery goes to plan, Tiger Roll will return to action in the Boyne Hurdle at Navan in February - a race he won last year - before bidding for a fifth Cheltenham Festival victory.

"The procedure he had went well. He's on box rest until Thursday week, when the bandage will come off and he'll start back walking," said Elliott.

"He'll be walking for three weeks then, all being well, he'll be back cantering after that. He was in full fitness and almost ready to run when it happened. It's not ideal, but if it had happened in January or February it would have been a lot worse.

"The Boyne Hurdle is where we'd love to go, but if he doesn't get there then he could just go straight to Cheltenham for the Cross Country."

"In my mind this is the race I've been training him for since last year."

Owner Michael O'Leary recently suggested that if the handicapper was harsh on Tiger Roll, his pride and joy may not run at Aintree, but Elliott is not taking the threat too seriously.

"The Randox Grand National is the plan. Obviously Michael O'Leary owns him and will make the final decision, but in my mind this is the race I've been training him for since last year," said Elliott.

"To be honest, he carried 11st 5lb last year, we know he's going to have top weight, we're not stupid. It's just how much the weights are compressed. The handicapper has a job to do, but I'm sure he's going to be fair with everyone.

"We're almost certain he's going to have to carry 11st 10lb, but would he have won with another 5lb last year? I think he probably would.

"It's the Grand National, I know what can happen in a Grand National. When you go to Cheltenham there's a lot of pressure, but going to Aintree, it's just great to be there. There's pressure but of a different kind.

"Anything can happen in the National, that's what makes it the race it is, but the build up to the race will be second to none." 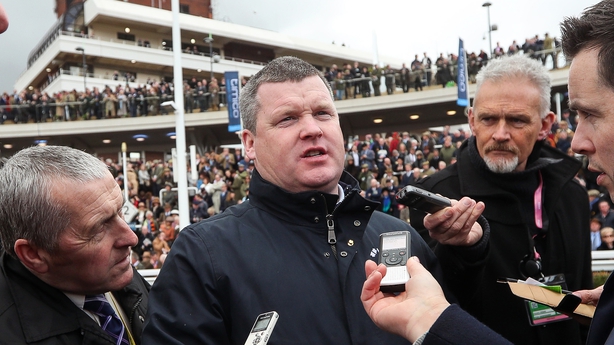 Elliott admits Tiger Roll is the undisputed star of the show at his Cullentra yard, with the gelding lapping up the attention.

He said: "We're very lucky to have him. Everyone knows him now, he's got a great name, he's a character. He's almost had two weeks of just standing in his stable, but he loves everyone coming up to pet him.

"Everyone that visits the yard, they don't ask about me, they ask about him first - they all want to see him. We've put him in the box on the corner so that he's the first horse you see when you enter the yard."

Tiger Roll raised the Aintree roof when powering home in April and Elliott believes the reception will be even greater if he is in with a chance of a hat-trick.

He added: "My dream is to get this horse back fit for the Grand National - if he makes it, that will be awesome.

"If he's going out on the second circuit still with a live chance, it will be some atmosphere."

In addition to Tiger Roll, Elliott expects to be well represented come April, with 15 names in the mix.

"If we had to make the entries today, I'd make about 15. They are all in the handicap and all entitled to run in the race," he said.

"Borice could go - he runs in the Ladbroke at the weekend - we've got Dounikos who is a good horse when things go right, we've Jury Duty who won an American National, Alpha Des Obeaux is a graded winner, The Storyteller is a Cheltenham Festival winner, so is Shattered Love.

"Then we've Ravenhill, who was just beaten in a Kerry National and Noble Endeavor, who has lost his form a little but ran OK in the National last year when the ground was too quick. Roaring Bull will have an entry but might not get in, but Champagne Classic is a very good horse.

"Ucello Conti has run well in the race before, Monbeg Notorious is a good horse, General Principle is an Irish National winner and Prince Of Scars is a Grade One winner, so you can't say any of those horses don't deserve to run."