The Cullentra handler has saddled two of the last four winners of the Ballybrit showpiece, in Lord Scoundrel (2016) and Clarcam (2018), and looks to have every chance of adding to his tally.

Borice is the marginal favourite, having won his last two starts over hurdles by an aggregate of 67 lengths at Uttoxeter and Perth respectively.

Mengli Khan is significantly higher in the weights - after finishing third in the Irish Arkle at Leopardstown, the Arkle at Cheltenham and the Manifesto Novices' Chase at Aintree in the spring.

Elliott said: "Mengli Khan is probably the classiest horse in the race, but he's just finding it hard to get his head in front at the moment.

"He's in good form. He has Graded form and on his A-game will run well, but he blows hot and cold. He's working well at home. I think he'll get the trip, and he has a bit of class.

"We've Borice coming off a couple of good wins. He's in great shape and off that weight (10st 2lb) he'd have a great chance."

A Toi Phil, Barra and Ravenhill complete the Elliott quintet.

"Barra was unlucky the last day when looking like she was going to win, while Ravenhill won the Galway Plate Trial at Limerick," he added.

"With the prize-money there is for those races, you have to support it. In fairness to Galway and their whole team, it's unbelievable."

Peter Fahey is keeping his fingers crossed the popular Peregrine Run can extend his remarkable winning sequence in the €300,000 feature.

The nine-year-old is unbeaten in five starts since falling in the Topham Chase at Aintree in April.

Fahey said: "It's the type of race that you have to stay.

"He ran in it last year, he didn't perform, but the ground went soft on him - and we shouldn't have run him.

"He won't run unless the ground is safe - but you're not going to get good to firm ground, or anything like it, in Galway.

"Looking down through it, I think he'd have a great chance. He's in great form, he's improved from each race - and even from his last run over hurdles he's improved again.

"I couldn't be any happier with him going into it, so you'd be hoping for a big run." Harty said: "He's got a lot of weight, and it's a good race, but he seems in good form.

"We couldn't get a run into him, unfortunately. The way the ground has been has meant it's been difficult to get him out. But I'm very happy with him going into the race, and we'll see how we go." 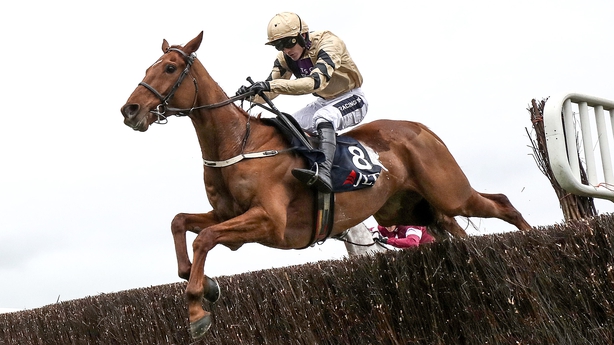 Yorkhill (above) has been a shadow of his former self over the past couple of years, but nevertheless appears the champion trainer's chief contender in the hands of Paul Townend.

Mullins' assistant David Casey said: "Yorkhill is a bit of an enigma, but he seems well and he's been working well and schooling well.

"He has shown a tendency to jump left, which isn't ideal around Galway - but he's been jumping straight in his schooling, and the last fence is also a long way from home. We're hoping he'll be able to go down the inner and the other 20-odd runners keep him straight.

"Pylonthepressure ran very well in Ballinrobe the last day (beaten a head by Peregrine Run), and we hope he's got an each-way chance off a light weight.

"Pravalaguna has been running away well. There's a lot of prize-money on offer, and we hope she might pick up a bit of it."

Paul Nicholls saddled the last British-trained winner of the Galway Plate in Oslot (2008).

This year, he runs the popular 14-time winner Black Corton and the talented but difficult-to-predict Modus.

Nicholls said: "Black Corton is a hard horse to place now because he is a rated 159. There are a lot of positives about the track and the ground, so I thought it was worth a go.

"It is probably a shot in the dark, and he has got it all to do at the weights. He loves good ground, though, and he goes well at this time of year.

"Modus could be interesting. He goes well fresh, and if he could get into a rhythm and jump nicely he has got a small chance.

"It is a competitive race, and we have won it before, but it is nice to have a couple of nice horses to run in the race."