Taquin Du Seuil won for only the second time since the 2014 Festival when landing a gutsy success in the BetVictor Gold Cup Handicap Chase at Cheltenham.

Village Vic (20-1) put up a tremendous effort to try to make the running and only went down by a neck.

O'Neill said: "The rain suited him last night, but when he made a mistake at the water jump I thought he was going to be well out of it.

"He was flat to the floor at that stage but he just stays, he loves this place and Aidan gave him a great ride.

"I was delighted with his run at Chepstow and the ground was a bit quick for him, but he came home well.

"It's nice to win a nice race.

"I was more worried before the race about More Of That because I believe he is a very good horse and it's unfortunate the way he's ran.

"He's obviously got his problems. I haven't spoken to Barry (Geraghty) yet, but it's disappointing.

"I think he's (Taquin Du Seuil) a better horse in handicaps as you get a better gallop than in conditions races. He's a galloper and I think two and a half here is the ideal trip for him.

Richard Johnson, rider of second-placed Villaage Vic, said: "He's run the race of his life off that weight.

"I don't think I've ever had as good a ride in a handicap here. He was brilliant and we've been mugged.

"The winner is a very good horse on his day." 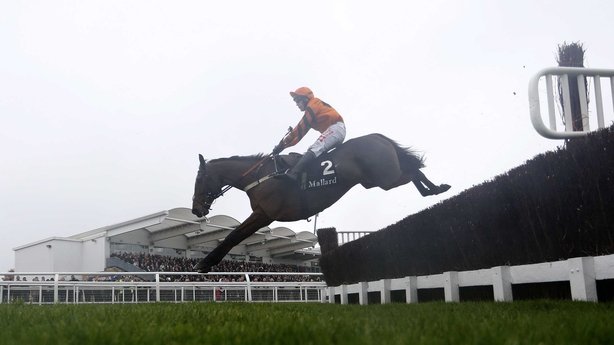 Thistlecrack maintained his unbeaten record over fences despite the odd scary moment in the mallardjewellers.com Novices' Chase.

Last season's champion staying hurdler took off too early at a couple of open ditches, but soon recovered and won in convincing style as the 1-7 favourite.

Irish challenger Marinero made the early running but Tom Scudamore decided to take Colin Tizzard's extremely talented performer to the front with a circuit left.

From then on Thistlecrack's overall jumping improved and though Marinero closed the gap briefly, the issue was never in doubt and he won as he liked by three and three-quarter lengths.

Tizzard said: "Everyone is going to scrutinise his jumping, because he is such a big, powerful horse who gallops so well, there's nothing else to talk about.

"He has tremendous scope and it's nice to get another run under his belt - he's getting experience of jumping round against lesser opposition, but has he learnt anything today?

"I was glad when Tom went on (as the second circuit approached) because he was better going a bit faster."

Thistlecrack will stick to the novice route for his next race, which could be at Newbury's Hennessy meeting.

"I would say he will stay as a novice for now - he might have another run at the end of the month, possibly at the Hennessy meeting," said Tizzard.

"He's not the finished article and I can't see any point in staying in his stable for the next six weeks. I'd like him to take on more rivals, but people won't take us on.

"The King George is a very hot race, a 'yeehaa' all the way round as we've seen in the past. It's one of the toughest races you can imagine.

"If we're going big after Christmas, he needs to get more experience - he has such a big engine he won't have given himself a hard race today. At the moment, he's a novice chaser and so we'll have another run and then decide his next target."

Viconte Du Noyer (20-1) won a dramatic race for the BetVictor Handicap Chase to complete a quick double for the Tizzard stable.

Le Reve, who unseated Nico de Boinville at the second fence when sharing the lead with Shotgun Paddy, caused mayhem at the fence in front of the stands on the second circuit.

He went straight across the obstacle, causing a pile-up with the well-fancied Cogry, Racing Pulse and Midnight Prayer the casualties.

Shotgun Paddy and Any Currency carried on with pacemaking duties but the three-mile-three-and-a-half-furlong distance took some getting as Harry Cobden brought Viconte Du Noyer with a strong run to claim the spoils by a length from Warrantor.

The Philip Hobbs-trained three-year-old followed up his debut success over jumps at Ffos Los in some style under Barry Geraghty by a length and three-quarters from Diable De Sivola.

Anteros sprang a 20-1 surprise in the Regulatory Finance Solutions Handicap Hurdle for trainer Sophie Leech and jockey Paul Townend with a seven-length verdict from Corrin Wood.

Leech said: "He just needs to be produced at the right moment as he doesn't find much off the bridle, but it worked out great today."

Trained by Suzy Smith and ridden by Sean Bowen, Clondaw Cian found plenty to see off Solatentif by three and a half lengths.