Aidan O'Brien's Hit It A Bomb will be aimed at Classic glory next season after powering home under an inspired Ryan Moore to win the Breeders' Cup Juvenile Turf at Keeneland.

Ridden towards the rear of the field for much of the mile contest from his draw in stall 14, the War Front colt had many lengths to make up turning into the straight, as Manhattan Dan still led after setting the early pace.

Birchwood began to stay on well for James Doyle and Richard Fahey, but Moore could be spotted weaving his way through on the unbeaten youngster and once he engaged top gear there was an inevitable look to the outcome.

He got up to win narrowly but cosily, with Airoforce just edging out Birchwood for second.

O'Brien has now won three of the last five runnings of the race, and William Hill reacted with a 16-1 quote for the 2000 Guineas.

The Ballydoyle trainer said: "Obviously I'm delighted, he won his maiden very nicely at the Curragh and Ryan loved him that day.

"We were looking forward to bringing him here, but we were very worried when we saw stall 14.

"He has a nice turn of foot, as we saw in his Listed race at Dundalk, where he took off. I'd say he's a classy miler and we will be looking at the Classics over that distance next year."

Fahey said of Birchwood, his first ever runner at the meeting: "We were delighted with that run and he only gave best in the last three or four strides."

Doyle said: "He hit the line well and saw the trip out better than I thought he would. I couldn't really fault him."

William Buick rode the fancied Cymric for John Gosden, but having been handy in third he was one of the first of the principals to come under pressure.

Buick said: "The ground rode good to soft, this is a fast-ground horse and it was always hard work." 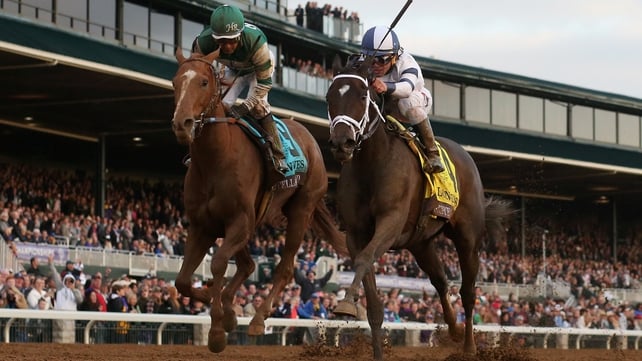 Stopchargingmaria held on determinedly in a pulsating tussle for the Breeders' Cup Distaff.
Todd Pletcher's filly, who was disappointing in her final race leading into this, made eyecatching headway rounding the turn for home.

She took the lead soon after, with Stellar Wind hot on her heels, but she responded to all of Javier Castellano's urgings and flashed past the post just in front, although the pair came close together.

An inquiry followed, together with an objection by Stellar Wind's rider Victor Espinoza to Castellano, but the placings remained unaltered after a five-minute delay. The stewards ruled there was insufficient evidence to change the result.

Pletcher said: "The two fillies did come close together a couple of times, but I think the best filly won." 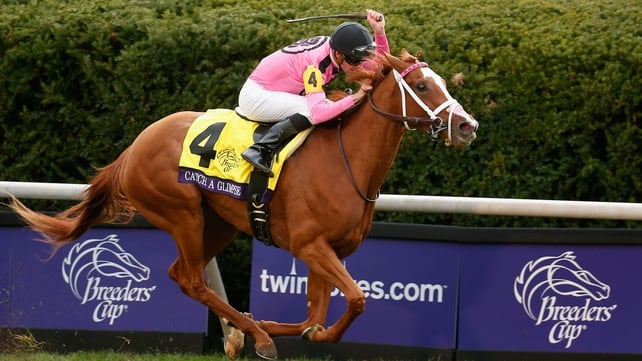 Alice Springs went off favourite for Aidan O'Brien and Ryan Moore and duly travelled well not too far off the pace, holding every chance turning for home.

Going best of all two furlongs out looked to be Frankie Dettori and Illuminate as they tracked Moore, but Richard Hannon's runner was never able to quite get on terms down the straight.

Alice Springs could have done with a bit more room, but there were no real excuses as Catch A Glimpse, who had disputed it from the off, ran on well.

O'Brien said of Alice Springs: "She ran a good race, and Ryan was very happy with her. For a few strides it was a little bit tight in there, but Ryan said she got the mile very well. She's a lovely filly and is a lovely prospect for next year."

Dettori said: "I had a great trip and we were the last one off the bridle, but the combination of the trip and the ground on the back of a long season meant that she didn't pick up quite like I thought she would."

Nemoralia's jockey Joel Rosario said: "The trip and the ground were fine for my filly, but against these horses it was very difficult to make up so much ground in the straight, although I thought she finished best of all."

Liam's Map was a very impressive winner of the Breeders' Cup Dirt Mile.

Not much went right for the red-hot favourite, who generally races prominently but was not that quickly away from stall three and also keen at times for jockey Javier Castellano.

Eventually settled in fourth, albeit in a pocket, Todd Pletcher's once-beaten grey just needed hands and heels down the straight to haul in Dubai World Cup third Lea, winning with plenty in hand in a fast time. Red Vine was third.

Ryan Moore and War Envoy never really threatened and finished well to the back of the field.

Co-owner Vincent Viola confirmed the four-year-old Liam's Map will now be retired and said: "I saw at the top of the stretch how he was turning, his stride was really comfortable. Once I saw him with that stride it reminded me of the first time we saw him breeze."