Aidan O'Brien landed the Keeneland Phoenix Stakes at the Curragh for a remarkable 13th time when Dick Whittington came out on top in a thrilling finish to the Group One contest.

There were three non-runners owing to the ground including the well-fancied Anthem Alexander, which meant Kool Kompany was sent of the 8-11 favourite and Dick Whittington was a 6-1 shot under Joseph O'Brien.

Cappella Sansevero struck the front briefly going to the final furlong, but Dick Whittington and Kool Kompany soon headed him and after settling down for a duel through the closing stages, it was the former who prevailed by half a length.

The well-touted Ballydoyle juvenile John F Kennedy (11-8 favourite) was beaten at odds-on first time but stepped forward markedly with an impressive victory in the Irish Stallion Farms EBF Maiden, running clear in the final quarter-mile under O'Brien jnr to win by four and three-quarter lengths.

There was a surprise result to the Phoenix Sprint Stakes when Pat Smullen, picking up a rare ride for the Tommy Stack team, drove the 20-1 shot Scream Blue Murder to victory in the Group Three contest.

British raider Hamza hit the front going to the final furlong, but Scream Blue Murder collared him and comfortably held the late challenge of Jamesie by three-quarters of a length, with hot favourite Maarek never a threat.

Andy Oliver sprung a shock when Run The Red Light, sent off at 50-1 after being well beaten on her debut, led all the way in the hands of Fran Berry in the Loder EBF Fillies Race and cleared away to score by three and a quarter lengths.

The trainer completed a double when Chris Hayes ploughed a lone furrow on the wide outside on No Dominion (16-1) in the Kerry Businesswomen's Network Handicap and never looked like being caught as he came home a length and three-quarters clear.

Berry doubled up too when Jessie Harrington's Port Merrion (5-1) resisted Yava by a neck in the Gabriel Curran Memorial Handicap. 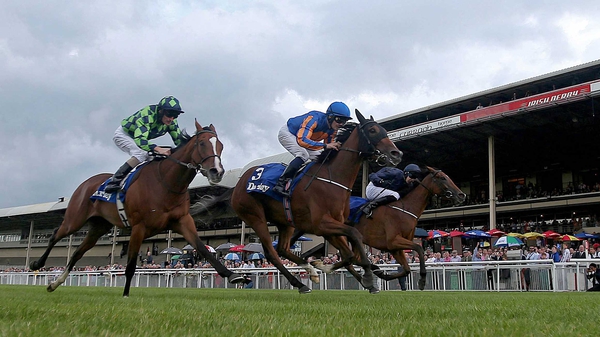 Bracelet takes victory in Irish Oaks at the Curragh