Ireland's Michael McKillop disappointed in eighth place in the final of the T38 1500m in his Paralympic Games farewell this morning, clocking four minutes 27.69 seconds as Canada's Nate Reich routed the field to win gold.

Antrim's McKillop, who turned 31 this year, has already four Paralympic gold medals in his trophy cabinet, from three different Games.

His form has wavered in the last couple of years, while his task was made harder by his enforced move from the T37 to the T38 class, a category where athletes are less impaired.

From the gun, the sign weren't good, with McKillop struggling off the pace.

Pre-race favourite and world record holder Reich seized the lead at an early stage and proved a class apart, putting distance between himself and his rivals to set a new Paralympic record of 3:58.92.

Algeria's Abdelkrim Krai finished with a flourish to deny Australia's Deon Kenzie the silver medal, setting a new personal best in the process.

Canada’s Liam Stanley, who landed T37 silver behind McKillop at Rio 2016, broke the his old Irish rivals' Paralympic record in that former class with a run of 4:06.95 but could still only finish fifth.

'We all look up to this guy, he's a true legend' - Four time Paralympic gold medallist Michael McKillop takes the plaudits from competitors and confirms he's competed in last Paralympic Games in an emotional interview after finishing 8th in the T38 1500m final pic.twitter.com/yS5Y6hWKFF

"It just didn't happen," a crushed McKillop admitted afterwards. "I just didn't have anything in my legs and I don’t know why. I'll not think about it until a couple of weeks' time.

"It’s just devastating. When you come to your Paralympic Games, the pinnacle of everyone's career, and to falter like I did is upsetting. It was going to be my last Paralympic Games anyway, but to go out like that, to lose my unbeaten streak in the T37 category is heartbreaking."

The Ballymena man briefly put his disappointment aside to thank those who had aided him in his Paralympic journey adding: "It's my dad's last year, he’s retiring this year, so I don't have a coach. Maybe it’s the right way to go.

"My wife has given up so much time and effort for me, sacrificed so much for me, and I think it’s time to give back to my wife and my dogs Edgar and Nala – I can't wait to see you.

"They put a smile on my face – my family, my friends – and I’ll never forget my time in Paralympic sport if it is to be the end.

"I just want to hold my head up high, knowing I've given everything to my sport. I've given strength and honour to every single Irish person, Northern Irish person. I represent the island of Ireland, and I’m proud to say that. To run around and represent the flag is a very, very special thing. Not many people get to do it. I’ve had the privilege to do that for 16 years." 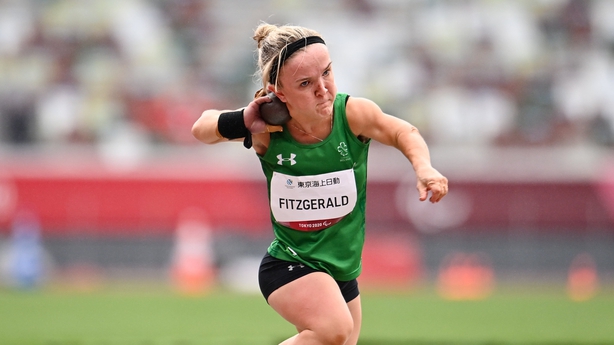 Fitzgerald continued to find improvement as the event progressed, with her sixth and final throw of 7.79m her best overall.

"Tricky conditions out there," Fitzgerald admitted afterwards. "The rain definitely effects the shot put but I’m not going to use it as the excuse.

"I got it in the last round so that is probably when I started to get settled with the conditions in terms of challenging the board more but ya, look, like somebody said, I can call myself a Paralympian now and that is a huge honour.

"It’s nice to add it to the CV, a little disappointed but I know there’s more to come in the future and I know this is only the beginning."