The prospect of a London-based NFL franchise moved another step closer as the league announced a deal which will see at least four regular-season games per year played in the city from 2018.

A five-year agreement announced on Thursday will see at least two games per year played at Wembley until 2020, with an option to extend the deal until 2025, while the Jacksonville Jaguars will continue their commitment to be the 'home' team for one of those games throughout the new deal.

That will mean the NFL is playing in two different venues from 2018 onwards, when a 10-year deal to play two or more games per year in the new Tottenham Hotspur stadium will begin.

"With the number of games included and the longevity of these deals it shows the commitment is very clear," NFL executive vice president of international Mark Waller told Press Association Sport.

"The momentum is there for what we're trying to do and the ability to play a full season of games is there now too."

Since its International Series came to London in 2007, the NFL has been testing just how deep the well of UK support goes as it adds further games to the schedule each year and experiments with kick-off times and other features.

By using two stadiums from 2018 onwards, Waller said the league now has even more options.

"The first thing to remember with both of these stadiums is we're playing in somebody else's venue and ultimately in order to be able to schedule the games we want to schedule, we need to have options," he said.

"Having a two-stadium deal gives us options and that's the most important thing. Now we have a commitment to play at least four games between Tottenham and Wembley from 2018 so that's fantastic from the fan's perspective."

The deal with Tottenham was announced in July, but has not signalled the end for Wembley which has hosted games since 2007 and will see its 13th regular-season contest on Sunday when the Jaguars play the Buffalo Bills.

While Wembley offers the larger capacity, accommodating around 84,000 fans for NFL games, the new Tottenham stadium will have NFL requirements - including a removable artificial pitch and expanded locker rooms - built in to the design, and using the two in combination could allow league executives to get a better picture of what a London-based team might look like.

"We've always said the beauty of the Tottenham deal is the flexibility of the dual-field system and being in on the ground floor of a new stadium being designed and built, and that gives us a lot of options," Waller said.

For the second successive year, Wembley is hosting three games this season. Earlier this month the New York Jets beat the Miami Dolphins 27-14 before a crowd of 83,986, while the Detroit Lions will face the Kansas City Chiefs in November.

The Jaguars are yet to taste victory in their adopted second home - and are tipped to lose again on Sunday against the Buffalo Bills - but that has not dampened the enthusiasm of owner Shad Khan, the Pakistani-American businessman who also owns Fulham.

"Our four-year London initiative has been every bit as rewarding as we anticipated, certainly in large part to the league's commitment to the UK and the world class experience that Wembley Stadium has provided the Jaguars, our fans and our partners," Khan said.

"Our interest in extending our agreement to play a home game each season in London is nothing new. So, we're very happy to make it official today. This is great news for the Jaguars and the stability of the team in Jacksonville, which has come to embrace London as our home away from home."

The NFL has an option to extend the new deal with Wembley until 2025. 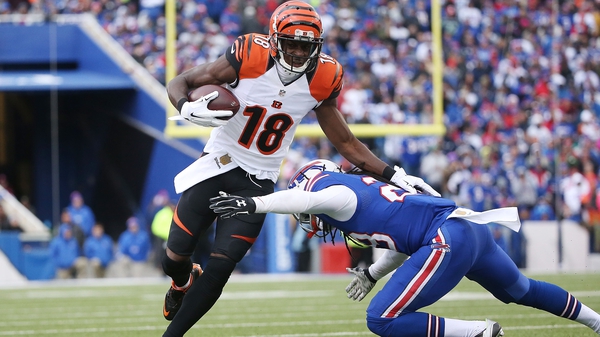