Emerging from a cloud of controversy and recrimination, 15-year-old Kamila Valieva delivered her lowest score of the season but it was still more than enough to lead the women's figure skating competition after the short programme at the Winter Olympics in Beijing.

Valieva, cleared to compete on Monday by an ad-hoc committee of the Court of Arbitration for Sport despite a positive drugs test, stumbled on her opening triple axel, but her total of 82.16 was enough to put her in first place, above her compatriot Anna Shcherbakova, who scored a season-best 80.20.

It leaves Valieva as the clear favourite to win the event when it concludes with the free skate on Thursday. But if she finishes in the top three, no medals will be awarded, with the podium put on hold until the full investigations into the Russian's doping case has concluded.

Valieva's fellow competitors criticised the decision. Asked if she had sympathy for Valieva, Great Britain's Natasha McKay said: "I have sympathy for whoever will be on the podium who won't be receiving their medals - it's the most important part of the Olympics and they won't get that chance. 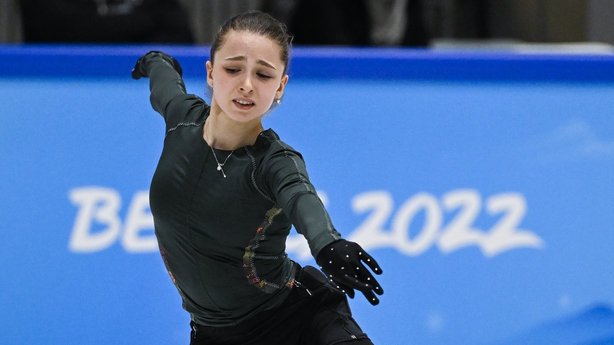 American Mariah Bell, whose team-mates are still awaiting their medals after finishing in the silver medal position behind Russia in last week's team event, added: "I feel sad for my team-mates. It seems wrong to punish people who have done things the right way."

In Moscow, meanwhile, giant posters appeared on the side of tower blocks with a picture of the skater bearing the message: "Kamila - we are with you."

Valieva had been cleared to compete despite returning a positive sample for the banned heart medication at the Russian National Championships on Christmas Day.

Earlier, the International Olympic Committee's head of discipline, Denis Oswald, revealed that the Russian case to the CAS had centred on the claim that the trace of trimetazidine in Valieva's system could have come from sharing the same drinking glass as her grandfather, who takes the drug for medical reasons.

"Her argument was this contamination happened with a product her grandfather was taking," Oswald told reporters in Beijing.

Valieva received the loudest cheer of the night when she was introduced prior to the start of her programme. She almost touched down on her opening triple axel, but otherwise landed all her elements and appeared to be in tears at the end of her routine.

Despite falling well short of her 90.18 score in last week's team competition, which came close to her own world record of 90.45, it was clearly going to be enough to establish a lead, and underscored the gulf in class between the 15-year-old and even her most capable of rivals.

Both Valieva and Shcherbakova, along with fourth-placed Alexandra Trusova, hail from the same club in Moscow, Sambo-17, and share the same coach, Eteri Tutberidze, who has come under fire for the number of injuries and premature retirements endured by skaters under her tutelage.

The notion of diminished responsibility due to her age, and the implicit shift in focus towards her entourage, formed one of the "exceptional circumstances" behind the CAS decision to allow Valieva to compete, along with the delay in the delivery of the results from the WADA-accredited laboratory in Stockholm.

"The prevention of harassment and abuse in sport is hugely important and minors are maybe particularly vulnerable, but everyone is vulnerable," the IOC's medical and scientific director, Richard Budgett, said on Tuesday.

"We have a responsibility to make sure the programmes are in place to protect all those individuals, and certainly you can look at doping in many cases as a form of abuse, so the prevention and safeguarding programmes are particularly important."