Snowboarder Seamus O'Connor has missed out on qualification for the final in the men's halfpipe at the Beijing Winter Olympics.

O'Connor, appearing at his third Games, finished 15th overall and missed out on the top 12 spot that would have seen him advance.

"It was one of those days," O'Connor told RTÉ Sport. 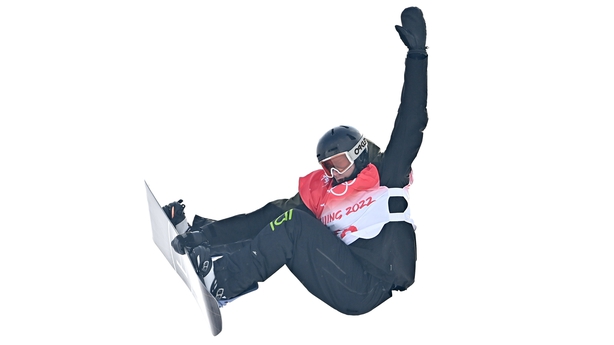 "I had a ton of fun, snowboarding to me is the funnest thing in the world and every day that I get to ride a snowboard I'm thankful.

"My first run was a little bit sketchy. I had it down better yesterday. But I was really looking towards my second run to come back and clean it up and put that Seamus signature on but something went wrong on the take-off of my first trick on the second run and I had to pull out of the double, which then ended the run for me.

"But it's snowboarding and it's never perfect and that's alright."

He added: "To be at my third Games, overall it's been an incredible experience."

Two-time silver medallist Ayumu Hirano of Japan led the way among the qualifiers with a total of 93.25, followed by Australia's James Scotty (91.25) and Ayumu's compatriot, Ruka Hirano (87.00).

Slovakia's Petra Vlhova won the gold medal in the event on the 'Ice River' course, holding a 0.08 advantage over silver medallist Katharina Liensberger of Austria with Switzerland's Wendy Holdener in the bronze medal position just a further four hundredths behind.

USA's Mikaela Shiffrin failed to finish the first leg, with the four-time slalom world champion lasting little more than five seconds on the slope, having also crashed out of the giant slalom on Monday.

Watch daily highlights of the 2022 Winter Olympics on the RTÉ News channel at 3pm, with clips of the action on RTÉ Sport Online, the RTÉ News app and RTÉ Sport's social media channels.