The Olympic debutant saw the event postponed from Sunday due to high winds, and felt he could have performed better on the technical course.

He will refocus on his favoured event, the Super G, on Tuesday.

"I’m pretty disappointed with today. I’m lucky I have more events and will try and do a better job in the next few days," he said.

"It’s a great, challenging course. There are definitely tricky aspects, and it’s a great Olympics course and fun to ski.

"I’m skiing at a much higher level in Super G and I’m looking forward to that."

There was disappointment for Tess Arbez, who crashed out in her first run in the women's giant slalom event.

Arbez, who finished 38th in the event in Pyeongchang back in 2018, will now concentrate on the slalom, which takes place this Wednesday.

"I feel really disappointed right now, the conditions were so tricky out there," said Arbez.

"It was very icy. A lot of people came down and it felt very different to how it was the past few days. I know I'm really pleased to be at my second Olympics, but it is hard. I will process what happened in the run with my coach and refocus so that I can be ready for the slalom on Wednesday."

It was a challenging day for all competitors on the course named 'Ice River', with defending champion Mikaela Shiffrin's defence of her Winter Olympic title lasting just a few seconds, while American Nina O'Brien appeared to collide with the penultimate gate in her second run and crashed over the line.

O'Brien was treated by at least four medics as the race was temporarily halted before being carried off on a stretcher.

Elsa Desmond is officially an Olympian after her first two runs in the women's luge.

The 35th and final qualifier for the event, the 24-year-old doctor enjoyed a clean first run and a top speed of 114.7 km/h to record a personal best time of one minute 1.608 seconds to sit 33rd overall.

Her second run included a couple of early hard hits and she sits on a time of 2:05.465, allowing last-placed Doina Descalui of Romania to leapfrog the Irish competitor.

Runs 3 and 4 take place tomorrow, with Germany's Natalie Geisenberger leading the way from compatriot Anna Berreiter, with less than a second separating the top six. 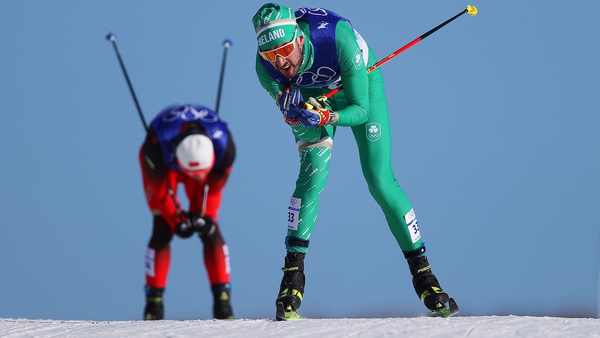