The Winter Olympics may be the Mecca of adrenaline junkies and the sport of luge may produce some of its most dedicated followers – but history-making Irish athlete Elsa Desmond doesn't count herself amongst them despite routinely reaching speeds of up to 140km per hour in her sled.

"As a kid I was scared of everything," said Desmond, who will become the first Irish athlete to compete in the sport when the opening women's run is staged at the Yanqing National Sliding Centre in Beijing next Monday.

Doctor Elsa Desmond, to give the Maidenhead-born athlete her full title, knows all about treating cuts and bruises, but she feels that there is too much focus on the crashes in the sport and not enough on the enjoyment it brings to those who take the icy track.

In summary, luge is similar to the bobsleigh and skeleton events in that competitors hurtle themselves down icy courses at ridiculous speeds. In luge they do it feet first and of the three it’s the only one where athletes actually start their run in the sled.

It can be a hairy watching experience seeing the twists and turns being navigated at such high speeds, but Desmond is calm about the pitfalls involved.

"Not very," was her reply when asked just how dangerous the sport is.

"When you’re starting out, you begin three or four corners from the bottom on your first run and you don’t really get faster than 50km an hour.

"Then you work your way up the track as you get more experienced until you can go from the start.

"I’ve had five or six DNFs [did not finish] this season but I have been injured in none of them. You just flip and come to a stop.

"People focus on crashes a lot in our sport but they’re not as big as people think.

"I've had a couple of small concussions, a broken ankle and a broken finger and that’s about it.

"Given the speed we’re going at, that’s not bad and you always have that padding on your shoulders and things like that to help prevent breaks."

When Desmond travelled to South Korea to watch the 2018 Winter Olympics, she soaked in every moment of the atmosphere. The luge course drew her attention, obviously, while the snowboarding events were also greatly enjoyed.

Little did she think that four years later supporters, albeit on a limited basis due to Covid restrictions, would be coming to watch her in action.

"Going through this Olympic cycle was about getting experience and understanding the qualification process and then we could build on that for next time.

"It really was a surprise when I got in this time.

"The challenge in selection criteria is that it’s all translated from German to English so the wording was a bit tricky.

"Looking at it we thought it was going to go one way but in reality, it went another, which was great for me.

"My run in Sigulda [Latvia] was not as good as I had hoped. I had hoped that race would clinch it for me but I didn’t get the result I had been hoping for or achieved in training. I thought it wasn’t going to be enough, because of that race, but it was."

When Desmond is described as the face of luge racing in Ireland, it is a very accurate statement. Nobody raced in the sport here until she took up the reigns having previously competed with Great Britain in her younger days.

She’s working on changing that with the Irish Luge Federation formed in 2020 and operating out of Oldcastle in county Meath, but it has still been a tough one-person effort.

"Sometimes it can be challenging when I’m out on the circuit by myself but I’m really lucky in that we have the FIL team, the International Luge Federation, which is made up of athletes from small nations who come together as a team and we share coaching, travel, accommodation.

"I have been sharing with a Bulgarian athlete all season, I’ve been with the Taiwan team, so we are kind of one team and you have that support network on the course.

"Being the face of it publicly has been quite daunting because it’s not something I’ve done before, these interviews are still quite new to me.

"It’s also an opportunity to try and build the sport and recruit and try and get sponsorship, all of those things too."

As well as basically running the sport in the country, Desmond has had to fit in her medical studies and she is grateful to the flexibility shown towards her in that field.

"I graduated in the summer and then in July I started with my Trust, I’m based in Southend University Hospital," she said.

"I worked full time in surgery until I went away for the season. When I go back, I’ll go back into surgery.

"In England they do your two years of foundation and I’m doing mine over three years instead, they’ve given me the flexibility to do that. I haven’t had to put my medical career on hold, and it has been really nice that I can continue both at the same time because they’re both very important to me."

For the next few weeks in Beijing, all that determination and dedication will see Desmond compete with the best athletes in the world.

The 24-year-old may find herself ahead of schedule, but given her journey to date, don’t be surprised if she raises a few eyebrows in China. This is one non-adrenaline junkie destined for big things. 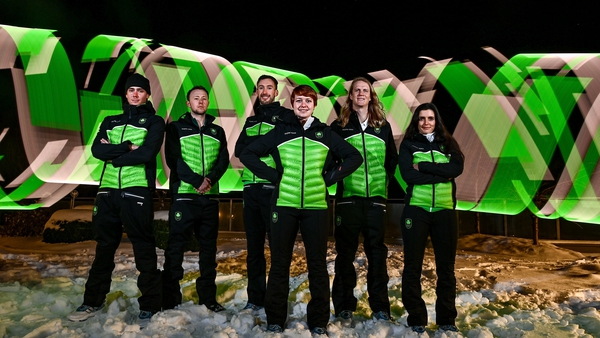