Rather than weigh her down, Kellie Harrington says the expectation back home in Ireland lifted her to the greatest of heights as she reflected on the achievement of becoming an Olympic champion at Tokyo 2020.

By beating Brazil's Beatriz Ferreira in the 60kg final on Sunday, Harrington became the third Irish boxer to win Olympic gold, following in the footsteps of Katie Taylor and Michael Carruth.

In the wake of her triumph, Harrington joined RTÉ Sport's Peter Collins for an in-depth chat about the elation of victory and how she had plotted her path to the top step of the podium.

Overcome with emotion as she caught a glimpse of the joyous scenes in her native Portland Row, Dublin, Harrington said the support from home had given her greater impetus.

"I didn't really think that many people would get up and watch it. I thought they would probably re-watch it because it is quite early in the morning," she said of the fight which began just after 6am Irish time.

"But some people say the weight of a nation could bring you down, but it really lifted me up and to have them there.

"When I was going into the final, I knew whether I took a gold or a silver, I knew I had made the country proud and made me proud, my family proud and just the way I've carried myself throughout this tournament, throughout the Olympics, I'm proud of that."

She added: "I'm so happy and honoured to lift a nation and give everyone something to smile about and cheer about. That probably means more to me than (the gold medal) does. One person lifting a small nation, it's just the stuff that dreams are made of."

On the achievement slowly sinking in, she said: "It's like you're a balloon and someone is letting the air out bit by bit and you're just deflating and deflating, and the energy it's just going and going.

"I just felt at the end when they announced 'in the red corner', I was totally deflated and I was like, 'What a relief'. I've worked so, so hard for this.

"To step on top of that podium today with the national anthem and our flag raising up above us, I can't describe what it feels like. It's just amazing."

Harrington said she had remained "calm and composed throughout" even after narrowly losing the first round 3-2 on the judges' score cards and spoke of being buoyed by the plan devised together with the high performance coaching team.

"We had gone over tactics yesterday morning when we were doing a pad session," she said.

"And then I'd spoken to my club coach as well and he had the same tactics as the performance coaches so they just came up with a fantastic plan.

"Today, before I went out and fought, we carried it out on pads again and then just went out and done it and took it round by round.

Harrington also highlighted that the calibre of her final opponent made the occasion even more special as she paid tribute to the fighters she faced in Tokyo. 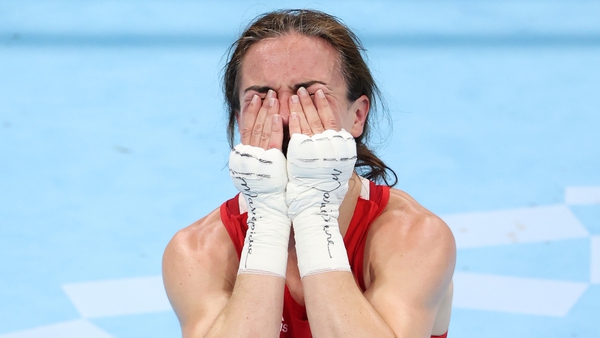