Kellie Harrington won gold in the lightweight boxing final in Tokyo after delivering an exhibition of the sweet science in her unanimous decision victory over reigning world champion Beatriz Ferreira of Brazil.

Harrington weathered a punishing opening round at the Kokugikan Arena in which she was caught off-balance by one of the many flurries by her opponent, who was up on three of the five judges’ scorecards after the first three minutes.

But the stylish Portland Row pugilist made the necessary technical adjustments, switching to southpaw and boxing behind her jab expertly to control the distance, with Ferreira often swinging at fresh air as she lost the second round on every card.

Ferreira showed improvements in the final round but absorbed a big left hand from Harrington, while the pair traded big shots in the final few seconds before embracing each other at the final bell.

Harrington was once again favoured by all five judges in the final round and was understandably overcome with emotion after being announced as the winner on every scorecard.

The success of the 31-year-old marks the first time Ireland has won two gold medals in two different sports at the same Olympics, with rowers Fintan McCarthy and Paul O’Donovan also triumphing in the men’s lightweight double sculls.

Mira Potkonen of Finland and Sudaporn Seesondee of Thailand both won bronze medals as losing semi-finalists, with the latter Harrington's victim in the penultimate stage of the competition.

'And the winner, by unanimous decision....'

Harrington spoke of her sense of relief and pride after clinching victory.

"It's just fantastic. I can't wait to get back home," she told RTÉ Sport.

"I'm absolutely exhausted to be honest. What a journey, it's just fantastic."

She added that despite the weight of expectation, she did not feel the pressure.

"This is the stuff of dreams"

"People might say, 'that's a pressure' and you might feel you have a big weight on your shoulders but I actually really didn't. I knew no matter what happened out here, whether it was gold, silver or whatever, I knew I'd made myself proud and I know I'm making the people of Ireland proud regardless of the colour of the medal.

"Just being here and putting our little nation on the map, this is the stuff of dreams."

As the nation rejoices, Harrington, who was a frontline worker last year working in a Dublin hospital as a cleaner, said all her efforts were worth it for this day.

"I have no words," she said. "The hard work, dedication, sacrifice that has gone into this. The lonely moments, the tears. My family knows, my coaches know, the coaches here know, it hasn't even hit yet.

"I'm crying as I have a sense of relief. When I get back and I'm in my room on my own, or when I get to the team, it will hit, but I don't know, I'm just relieved.

"I never have any expectations going into tournaments. I just go in and expect to perform. I just focus on me and good things happen then. When you can do all of the little things, good things come after that.

"I do love that I have this medal, but it's step by step to get there and performance is key. If you don't perform well then you can't move on to the next stage. I don't go out saying I want a gold medal as then, if the s*** hits the fan, then you don't get anything.

"I'm an Olympic champion but it doesn't define me as a person.

"At home, I'd say it will be a bit mental, but I'll be back at work, back doing my normal thing, that's what keeps me grounded. My circle (of friends) is very small and it will be staying very small.

"I'm going to just keep doing what I do. Nothing will change. I won't start thinking I'm something that I'm not.

"This is me. I will continue to be this way - except I'll have my gold medal."

"We planned the fight and she has two styles. She can fight in orthodox, she can fight in southpaw and this is very difficult for opponents," he said.

"Our plan was no matter what happens, we must win the first round. And that was 3-2 (to Ferreira) because she's a good opponent."

Antia added that Harrington changed style at the start of the second round which proved to be the turning point.

IABA High Performance director Bernard Dunne paid tribute to her consistency on route to gold as the Irish boxing team signed off with two medals, with Aidan Walsh having won bronze in the men's welterweight category.

"She was amazing and she's been amazing for the whole competition," he said.

"Really over the last number of years, she's been so consistent in her performance, her attitude and it's a credit to Kellie, credit to her club coach, credit to the High Performance coaches and just the work that has gone on behind the scenes.

"It's just been fantastic and it's been grueling over the last 15-16 months with the cancellation of the European qualifier and just having to reset. 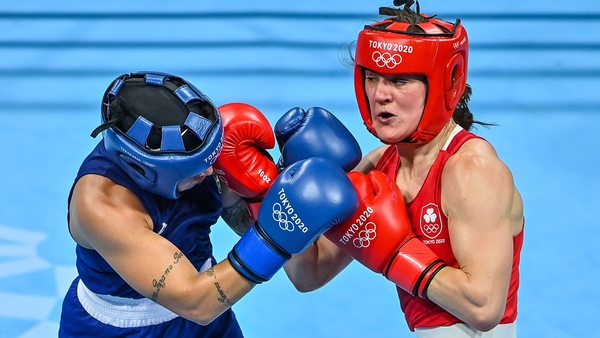 Tokyo 2020: 'Kellie put on a masterclass this morning'