Belgium's Nafi Thiam won her second consecutive gold medal in the Olympic heptathlon, while Damian Warner of Canada led from start to finish to win the men's decathlon gold.

Thiam dominated in the javelin and the long jump events to secure victory and add to her gold in Rio in 2016.

After ending Wednesday's programme third in the standings, Thiam launched a 54.68m throw in the javelin on her second attempt, her best performance this season, and came up with a 6.60m leap in the long jump before finishing with 6,791 points.

She beat Vetter by 102 points despite finishing seventh in the 800 metres in 2:15.98. Oosterwegel earned 6,590 points overall during the two-day competition.

Her fellow Belgian Noor Vidts produced a gutsy performance to win her 800m heat in an attempt to get on the podium, finishing more than two seconds ahead of Oosterwegel, but ending up fourth in the standings.

The finale was without 2019 world champion Katarina Johnson-Thompson after the Briton's gold medal bid ended on Wednesday due to a calf injury.

Warner set a new games record score of 9,018 points as he picked up gold. 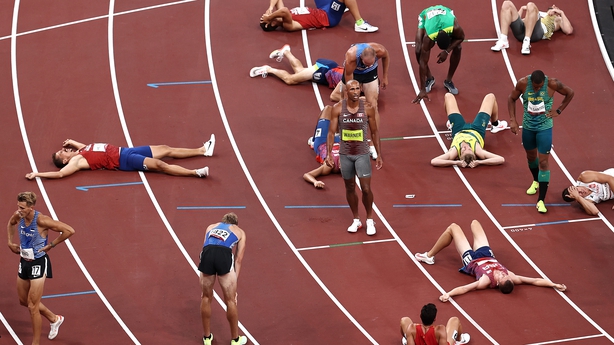 The Canadian (with yellow bib number above) arrived in Tokyo as the leading decathlete in the world in 2021 after scoring 8,995 points at a meet in May - the fifth highest total in history.

The 31-year-old kicked off his campaign by tying his own world record in the 100m and bettering the games mark in long jump on Wednesday. 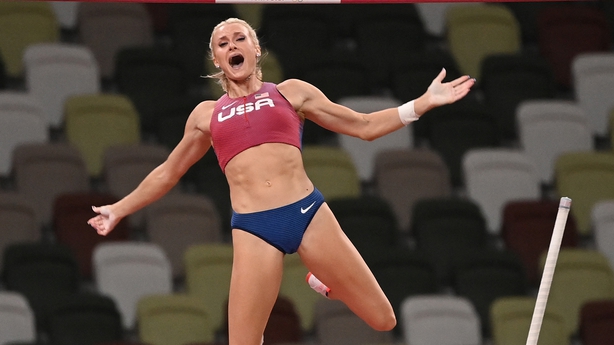 Nageotte's clearance of 4.90m at the second attempt was enough to secure victory, however, as Anzhelika Sidorova and Britain's Holly Bradshaw finished on 4.85.

World champion Sidorova, representing the Russian Olympic Committee, cleared her first four vaults at the first attempt to take the silver ahead of Bradshaw.

The pressure of competing in the Olympic final also showed on the other vaulters as the field was cut to just four after the second round with the bar at 4.70m. All four made it past the 4.80m too.

Greek Katerina Stefanidi, the gold medallist from Rio, was the first to drop out of medal contention when she failed to clear 4.85m.

A teary-eyed Nageotte returned to the field after climbing into the stands to celebrate with members of her team, attempting to set a new personal best at 5.01m.

She gave up after her first failed attempt, however, wrapping herself in her country's flag before taking a full lap of the track with the other medallists.

It was redemption for Bradshaw, who finished sixth in 2012 and fifth five years ago in Rio. She also came fourth at the 2019 world championships in Doha.

On the track, Steven Gardiner of the Bahamas won gold in the men's 400m, running a carefully balanced race to shut out the Americans again in an event they once dominated.

Anthony Zambrano of Colombia, the silver medallist at the 2019 world championships in Doha and third-fastest this year, took the silver. 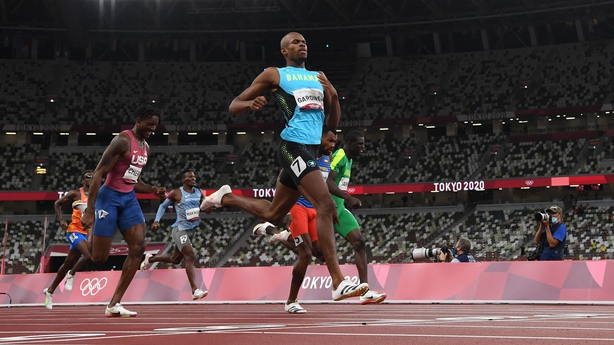 Kirani James of Grenada, the 2012 gold medallist and the silver medallist five years ago in Rio, grabbed bronze.

American Michael Cherry, who ran a personal best, finished fourth ahead of his compatriot Michael Norman to continue the country's poor run on the men's side of the track events.

The US had won seven straight golds beginning in 1984 to 2008. But they have failed to win the title since then, with James securing gold in 2012 and South Africa's Wayde Van Niekerk winning in Rio five years ago.

A terrific run by Gardiner proved decisive. He set off relatively slowly, but gradually picked up the pace to power to victory ahead of his rivals with a season's best time of 43.85, adding the Olympic title to the world gold he won in Doha in 2019.