Canada's Andre De Grasse won the men's 200 metres gold medal at the Tokyo Olympics on Wednesday with a scorching time of 19.62 seconds, a national record.

De Grasse, who claimed the 100m bronze and 200m silver at the 2016 Olympics and 2019 World Championships, came into the turn third but surged past his rivals in the last 40 metres to claim victory.

The Canadian became the first Olympic 200m champion since Jamaican Usain Bolt, who won gold at three consecutive Olympics from the 2008 Beijing Games before retiring in 2017.

Kenny Bednarek of the United States took the silver medal and his compatriot Noah Lyles claimed the bronze.

"That was a good race. My coach told me I've got to go hard on the bend. I've got to stay with Kenny on the turn, he has a magnificent turn.

"'Once you get off that turn, just relax and flow - that's what you're good at. Just try to stay loose, stay relaxed, keep pumping'."

Kenya's Emmanuel Korir won the men's 800 metres gold at Tokyo's Olympic Stadium on Wednesday, extending the East African nation's dominance in an event which they have now won four times in a row.

Kenya's double Olympic gold medallist David Rudisha's persistent injuries denied him the chance to defend his title, opening the way for a new champion to emerge. 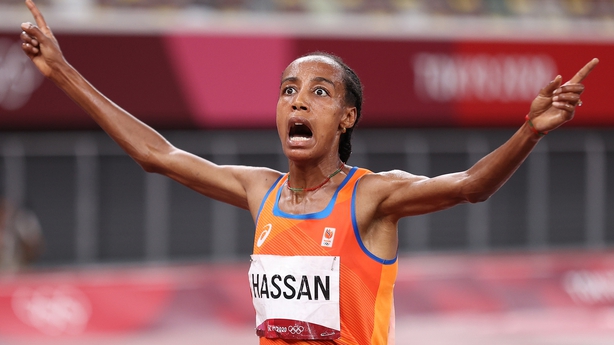 Dutchwoman Sifan Hassan has progressed to the second of what she hopes will be three finals, but the newly crowned Olympic 5,000 metres champion is likely to have to work much harder in the 1,500m to beat defending champion Faith Kipyegon.

Hassan, world champion at 1,500m and 10,000m, is hoping to add those Olympic titles to complete an unprecedented hat-trick.

Having been tripped in her 1,500 heat on Monday, she stayed well out of danger at the back of the second semi-final until the bell.

She then tore home, seemingly unconcerned about saving anything for the tests still to come, running hard through the line in a time of 4:00.23 minutes.

Also looking strong behind her was Briton Laura Muir, who posted 4:00.73 after opting to miss the 800m to pour all her energy into the longer distance.

Their biggest rival in the final is likely to be Kipyegon.

The Kenyan stretched the first semi-final to come home in a remarkable 3:56.80, a time better than the lifetime bests of all but four of the other 25 semi-finalists.

Ethiopia's Freweyni Gebreezibeher and Gabriela Debues-Stafford of Canada look to be the only others with a realistic medal chance, but Australian Jessica Hall set a continental record and Nozomi Tanaka a Japanese record as they both went under four minutes for the first time.

Kenyan Winny Chebet, also an outside medal hope, tripped and fell in the first semi-final before finishing last.