Thompson-Herah controlled the race from the start and was a clear winner, but 18-year-old Christine Mboma of Namibia produced an astonishing final 30 metres to make up four places and take silver in 21.81.

The winning time was the second fastest in history over the distance, behind only Florence Griffith-Joyner's 21.34 at the 1988 Seoul Olympics.

"It feels amazing to win two golds again. I have had a rough week. I haven't slept after the 100m final," she said.

"Honestly I am so tired, my legs just need some rest. I've done so many races in the last few days, but I am very grateful.

"Oh my god, it's amazing that I have ever seen this day. That I could complete another double. I can't believe it."

Thompson-Herah defended her 100m title on Saturday ahead of Jamaican team-mates Fraser-Pryce and Shericka Jackson.

Jackson failed to even make the final on Tuesday while the absence of Dina Asher-Smith only aided Thompson-Herah.

The Brit had been expected to challenge for victory but pulled out after failing to reach the 100m final having suffered a serious hamstring injury in June.

Mboma dropped down to the 200m from the 400m, her favoured event, in July after tests by World Athletics found she had high natural testosterone.

It meant the 18-year-old, and team-mate Beatrice Masilingi who came seventh, fell under the same regulations which stopped double Olympic champion Caster Semenya running in the 800 metres.

"This is my first Olympics. I came here for experience but I did better (than I expected). I am really happy with my performance. I am proud of myself," she said.

"In the past, every time I ran against the best athletes I felt nervous. But I don't feel nervous now.

"When I reached the race I lost my nerves and started pushing. I never give up."

The 21-year-old Duplantis, who finished with a silver medal behind world champion Sam Kendricks of the United States in 2019, remained the only man to fly over six metres this year. 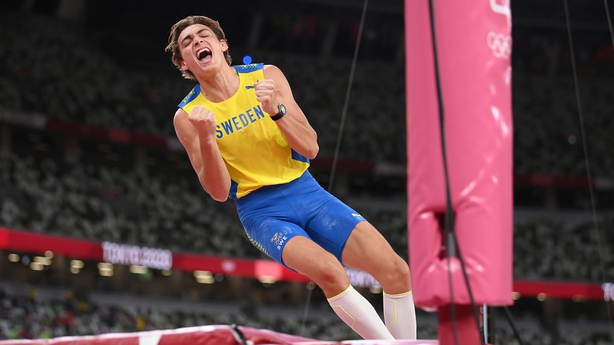 American Chris Nilsen cleared the bar at 5.97 with his first attempt, but could not match Duplantis and picked up the silver medal.

Brazil's Thiago Braz, who won the title at his home Olympics in Rio de Janeiro five years ago, took bronze with his effort of 5.87.

After victory was secure, Duplantis had three failed attempts at 6.19, as he tried to break his own world record of 6.18.