With Britain - Olympic champions in this event since 2008 - among the teams calling for Denmark to be disqualified in a row over illegal equipment, this match-up was already something of a grudge contest, but nobody foresaw an outcome like this.

A team pursuit is technically over if one team catches another on track, but this was an exceptional way to do it as Madsen apparently never saw Tanfield - the late replacement for Ed Clancy following the veteran's snap retirement - who had been distanced by the two lead British riders.

The UCI deliberated for half an hour before announcing that Denmark would advance to a final against Italy.

It was all part of a dramatic day, which began with news that the 36-year-old Clancy was retiring due to a back injury.

Clancy rode in Monday's qualifying session when Britain's time, the fourth fastest on the day, was a national record.

It then continued when British Cycling performance director Stephen Park confirmed Britain had been one of "several" teams to call for the Danes to be disqualified over the use of illegal equipment in Monday's qualifying session.

The team was seen with plasters on their shins in a bid to improve their aerodynamics, while also apparently wearing undervests that had not been properly registered in time. 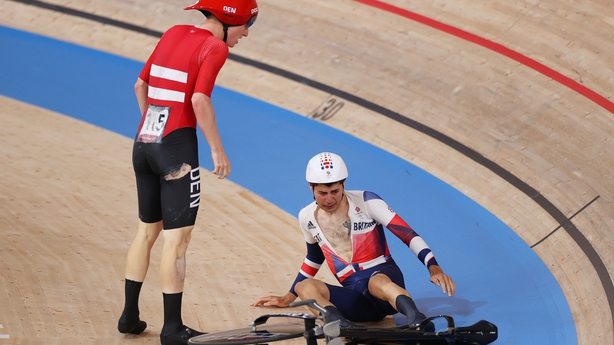 Park said that at a lively meeting of teams before today's session, the UCI confirmed the equipment could not be used for the rest of the competition, but indicated there would be no retroactive punishment, despite rules saying a team should face elimination in such circumstances.

"There was a fairly heated debate about whether the UCI were or were not going to apply their own rules about (the tape) and about undervests," Mr Park said.

"A number of the teams including ourselves have gone to huge lengths to make sure we are legal and have checked every single item with the UCI, as required by the regulations before we got here.

"Not surprisingly us and them are pretty disappointed that now there are teams turning up using undervests that are not part of the equipment registered."