A Belarusian Olympic athlete is sheltering in Poland's embassy in Tokyo after being offered safe passage to Warsaw, as the US slammed her team's attempt to send her home.

Krystsina Tsimanouskaya says she fears for her safety if she returns to Belarus, and claims her team attempted to force her onto a plane after she criticised her coaches.

The 24-year-old sprinter spent the night in Poland's embassy in Tokyo after arriving there yesterday evening.

Poland said it had granted her a humanitarian visa after a "criminal attempt" to kidnap the athlete.

"We have made sure that Krystsina Tsimanouskaya is safe in the Polish embassy in Tokyo and we will, if necessary, offer her the possibility of continuing her career," Polish Prime Minister Mateusz Morawiecki wrote on Facebook.

The athlete was expected to stay at the Polish embassy in Tokyo until leaving for Warsaw, possibly as soon as Wednesday, Poland-based dissident Pavel Latushka wrote on Twitter.

Her husband Arseny Zdanevich told AFP he had fled Belarus and was hoping to join his wife "in the near future".

"I believe it would not be safe for me to be there," the 25-year-old fitness trainer said by phone from Ukraine.

Ms Tsimanouskaya, a 200 metres specialist, criticised the Belarusian athletics federation after they tried to force her to run in a relay. She said that outburst had led to the attempt to forcibly send her home. 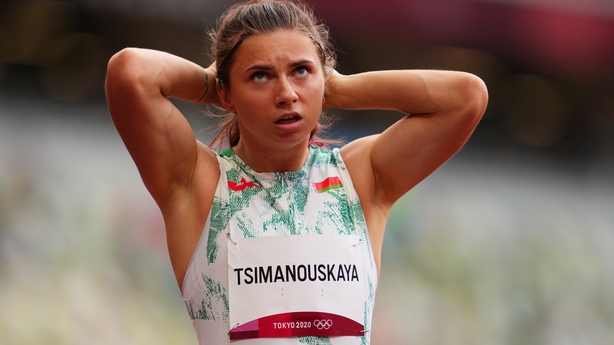 Belarus President Alexander Lukashenko has been cracking down on any form of dissent since mass protests erupted after elections last year that were deemed unfair by the West.

Ms Tsimanouskaya was one of more than 2,000 Belarusian sports figures who signed an open letter calling for new elections and for political prisoners to be freed.

Poland is a staunch critic of Mr Lukashenko's regime and has become home to a growing number of dissidents.

'Affront to basic rights' - US

US Secretary of State Anthony Blinken has accused Mr Lukashenko's regime of trying "to commit another act of transnational repression: attempting to force Olympian Krystsina Tsimanouskaya to leave simply for exercising free speech".

"Such actions violate the Olympic spirit, are an affront to basic rights, and cannot be tolerated," he added in a tweet.

Mr Lukashenko, who has been in power since 1994, sparked international outrage in May by dispatching a fighter jet to intercept a Ryanair plane flying from Greece to Lithuania in order to arrest a dissident onboard, Roman Protasevich.

Mr Lukashenko and his son Viktor have been banned from Olympic events over the targeting of athletes for their political views.

Shortly before the Tokyo Games, Mr Lukashenko warned sports officials and athletes that he expected results in Japan.

"Think about it before going," he said. "If you come back with nothing, it's better for you not to come back at all."

The NGO said Ms Tsimanouskaya's "alleged kidnapping ... is yet another example of the alarming athlete abuse occurring in Belarus".

It also accused the IOC of failing to protect athletes and sending the message that their safety was "secondary to the implementation of the games".

IOC spokesman Mark Adams said the body was launching a formal investigation and also expected to receive a report from Belarus's Olympic committee.

"We're going to need to establish facts," he told reporters in Tokyo, adding that the IOC would "need to hear everyone involved".

Asked about the safety of the team's remaining athletes at the games, Mr Adams said IOC and Tokyo 2020 staff were based at the Olympic Village and could be approached if necessary.

Japan's government has declined to comment on the specifics of Ms Tsimamouskaya's case, with the foreign minister saying that she was in a safe place and requesting asylum in a third country.