In the men's long jump Miltiadis Tentoglou of Greece won in the most dramatic fashion as he leapt 8.41 metres in his final attempt to snatch the gold medal from Cuba's Juan Miguel Echevarria.

Tentoglou was the world leader coming into Tokyo with an 8.60m leap at a domestic competition in May, but struggled to find his form and was outside the medals positions as he hit the runway for the final time.

He hit the board perfectly to match the leading mark, with his second-best jump of 8.15m assuring him of the gold by edging out the Cuban's 8.09m.

A limping Echevarria had one more chance to improve on his second-best effort but pulled up, sinking to his knees at the board, before being comforted by compatriot Maykel Masso, who won bronze with 8.21m.

"I wasn't able to get it right at the start. But in the end I managed to pull something out to get the medal. I always have something left, something in reserve."

Thirty years ago the greatest-ever long jump competition took place at the Tokyo National Stadium, the same site on which the Olympic Stadium now stands, when Mike Powell set the still-standing world record of 8.95m after an epic world championship duel with American Carl Lewis. 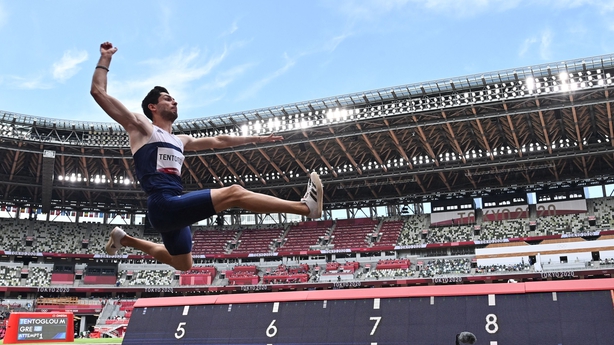 Hurdle champion Camacho-Quinn, coached by Irishman John Coghlan, exploded off the blocks and strode shoulder-to-shoulder with Harrison, accelerating through the finish to win her first-ever Olympic medal and Puerto Rico's first of the Tokyo Games.

Harrison and Tapper faced an agonising wait as officials analysed their photo finish, with the bronze medal-winner looking up at the screen and saying "pray Jamaica," as she awaited the results.

The victory capped a dazzling performance in Tokyo for Camacho-Quinn, who broke the Olympic record in her semi-final a day earlier.

She told reporters she nearly fell during the final, five years after she crashed out of her semi-final in Rio de Janeiro.

"I was really running for the record, I hit the hurdle - but everything happens for a reason," she said. "I crossed the line like, 'wait - I just won!'"

It was the first Olympic gold medal in athletics for Puerto Rico and Camacho-Quinn said she hoped her achievement could inspire children on the Caribbean island.

The race was the last of the morning programme at the stadium, where competitors were once again greeted by Tokyo's blistering heat.

The athletics competition will resume later on Monday.