Thomas Barr ran a season's best in his 400m hurdles semi-final in Tokyo but finished fourth, missing out on an automatic spot in the final.

The Waterford sprinter hit a hurdle on the final bend but finished strongly in fourth to leave himself in with a chance of the final, dependent on the times in the two remaining semi-finals.

Italy's Alessandro Sibilio, the third placed finisher in the subsequent semi-final, clocked a time of 47.93 to push Barr out of contention for a final spot.

No joy for Barr. Appeal is rejected due to insufficient evidence. The Italian will not be disqualified. Result stands

A late appeal from the Irish team over alleged 'hooking' by Sibilo, which would have seen Barr reach an Olympic final for the second time was rejected due to "insufficient evidence".

The race was won in a time of 47.30 by the current world record holder, Norway's Karsten Warholm.

The winner in the third semi-final, Kyron McMaster of the Virgin Islands, clocked the same time as Barr.

The Irish athlete's time was joint-seventh fastest across the three semi-finals but, for the time being, he now finds himself outside of the final places.

"That's the end of the road," Barr sighed, when speaking to RTÉ Sport immediately afterwards.

"I thought when I hit that hurdle 7 that it was going to cost me. I literally felt like I was in PB shape.

"Today was just one of those unlucky days.

"The event has moved on so much. There's two guys ready to break the world record, Karsten Warholm has already broke the world record. Two of them were in my race there. It's pushed the whole event on.

"In some ways, it's great. In other ways, it just makes it that bit more difficult to qualify at these championships. That time there would have been good enough to get me into a final of any other Olympics. And possibly even, do well in an Olympic final. 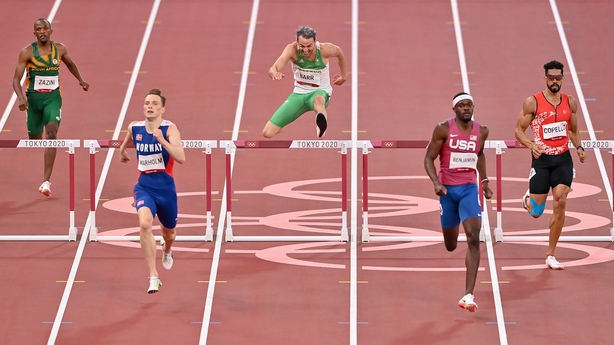 The 29-year-old insisted there was more racing in him and admitted it was frustrating that he couldn't deliver his best time on the day.

"That's the frustrating part in that I'm in probably the best shape I've ever been in. And I just didn't get to utilise it fully here today. So, there will be plenty more.

"I always rise for championships. Championships is where I love to come out and challenge and run my best times. It is frustrating and disappointing and I want to thank everyone for all the support. It's been so positive, this whole championship. I'm just glad I didn't get everyone up at a ridiculous hour to watch it!"