The major winners had both reached the halfway stage on seven under par and McIlroy improved to -11 while Lowry is on -10.

American Xander Schauffele leads on -14, one shot ahead of home hope Hideki Matsuyama, ahead of the final round at the Kasumigaseki Country Club tomorrow.

His superb second shot over the trees from Rory McIlroy helped him make par on 11. Shane Lowry birdied the same.

McIlroy began with a birdie before dropping a shot on 3 but he was flawless for 12 holes after that, recording four more birdies and missing several other chances.

"I got to four under through 13 and with a par-five and a couple of short par-fours coming up, I thought I might have been able to sneak a couple more birdies.

"But I ended up finishing on that score and it's only three behind with 18 to play. I've got a great opportunity tomorrow to go out there and shoot a good round of golf, see what happens."

McIlroy said that being part of an Irish team with Lowry again was "great".

"We've spent a lot of time together this week and it feels like it's back in the amateur days," said the 32-year-old.

"Especially with Neil Manchip being the team manager.

"We had some great times back in the day and we've been reminiscing. This week has sort of been a throwback to that."

Lowry hit five birdies and recorded two bogeys, his second on 14 after his tee shot got stuck in the branches of a tree.

The Offaly man subsequently left successive birdie opportunities short but sank a fine putt for par on 18 to seal a 68 and move to -10.

Eagle-eyed Shane Lowry spotted his ball high in the trees on 14 and spared himself a second tee shot. The Offaly man and Rory McIlroy still flying high#olympics #Tokyo2020 #RTESport #golf

"I played very well on the front nine and didn't really have my best stuff on the back nine," Lowry told RTÉ Sport.

"I holed a great putt for par on the last. Hopefully I'm standing here tomorrow evening and I can tell you that that putt meant an awful lot because it really kept me in the hunt.

"I came here with one goal in mind at the start of the week and my goal was to give myself a chance to win a medal on Sunday. I'm only two back from a medal now so I've got that opportunity and it's exciting.

"I just really wanted the opportunity to do something very special and I've got that opportunity tomorrow. I'll be all guns blazing to try and finish in that top three."

"I never thought I'd be competing at an Olympics so to do something like that would be very special for me, my family, my friends and everybody at home in Clara and in Offaly.

"Anybody who knows me knows I'm a proud Irishman. To be able to represent my country and produce a medal for Ireland would be something that would live long in the memory for me."

Tokyo 2020: 'My goal was to give myself a chance of winning a medal on Sunday' - @ShaneLowryGolf in the mix#olympics #tokyo2020 #RTESport

Overnight leader by a stroke, Schauffele was stalked relentlessly by playing partners Matsuyama and Carlos Ortiz but he broke clear with a birdie on the 18th to card 68 for a 14-under total.

A stroke behind Schauffele, Japan's Matsuyama drained a crucial putt for par on 18 to finish with a four-under 67, while Mexico's Ortiz (69) held the bronze medal position alongside consistent Briton Paul Casey (66) on -12 after a bogey on the last.

The stage is set for a battle royale in Sunday's final round, with nine players within four strokes of Schauffele, including McIlroy, who is in a tie for fifth with Colombia's Sebastian Munoz, Chile's Mito Pereira and Austria's Sepp Straka.

Lowry is joint ninth alongside Britain's Tommy Fleetwood, whose 64 was the second lowest round of the day. Korea's Im Sungjae carded 63 but is three shots further back. 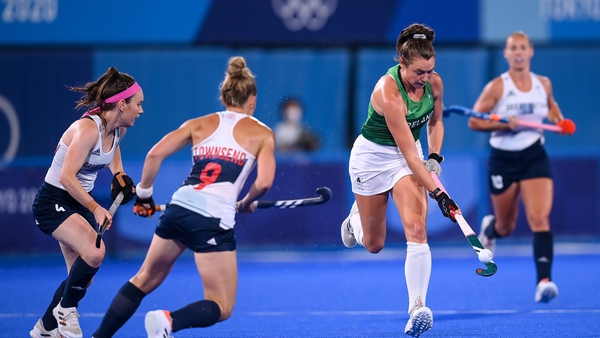