The Irish 4x400m mixed relay team have set a new national record to qualify for the Olympic final on Saturday.

The team of Cillin Greene, Phil Healy, Sophie Becker and Chris O'Donnell posted a time of 3:12.88 in a dramatic semi-final that saw two teams disqualified.

O'Donnell produced a surging finish to ensure that Ireland were the fourth team across the finish line and would have been relying on a fastest runners-up spot to make the final.

Initially, two of the teams that finished ahead of Ireland - first-placed USA and third-placed Dominican Republic - were both disqualified, meaning Ireland were promoted to second place.

However, both teams have since been reinstated on appeal. That meant that Germany and Spain missed out on the final but after a further appeal from the Germans they were allowed to remain in what will now be a nine-team final.

Regardless of the decisions surrounding the two reinstated teams, the Irish quartet's time had guaranteed them a spot in the final, which takes place at 1.35pm Irish time on Saturday.

'We all stepped up to the mark, I'm absolutely delighted' - the Irish 4x400m team of Cillin Greene, Phil Healy, Sophie Becker and Chris O'Donnell react to reaching the Olympic final in a new national record#Tokyo2020 #RTESport #Olympics

Speaking to RTÉ Sport after the event, opening runner Greene said the whole team "stepped up to the mark".

He said it was the first time he'd ever ran the opening leg of a relay, and so doing it in the Olympics was "a bit surreal".

"I've been really confident with the way training has been going and I've been racing really well so I was confident that if we executed our races together we would produce something really special," the Galway City Harriers athlete said.

"Everyone really did that today and we all stepped up to the mark, I'm absolutely delighted." 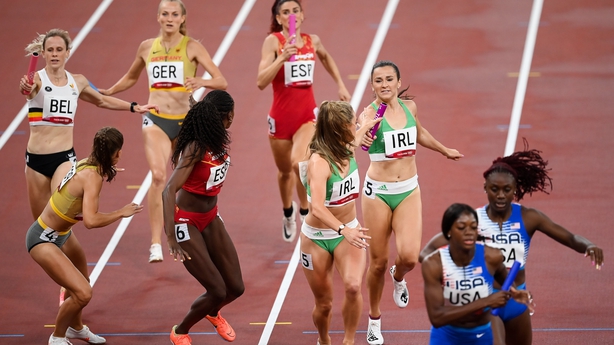 Bandon AC runner Healy ran the second leg and said she was "buzzing" to reach an Olympic final.

Healy - who will also compete in the 200m and 400m events - said that to "qualify for a final is just unbelievable."

She said that there is more in the team going into the decider.

"We shattered the national record that we ran in order to qualify - we took four seconds off it," she said. "There is so much more in this team." 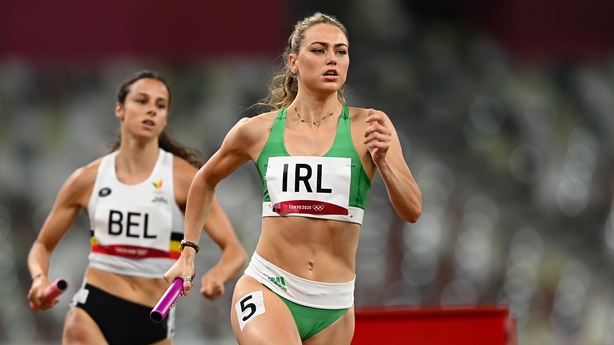 Becker ran the third leg, and told RTÉ Sport her aim was just to hold the position Healy and Greene had secured.

"I did that up to about the last 30m when everybody kind of veered off," the Wexford woman said.

She said the team came into the tournament hoping to run a time of 3:14. "We shattered that," she added. 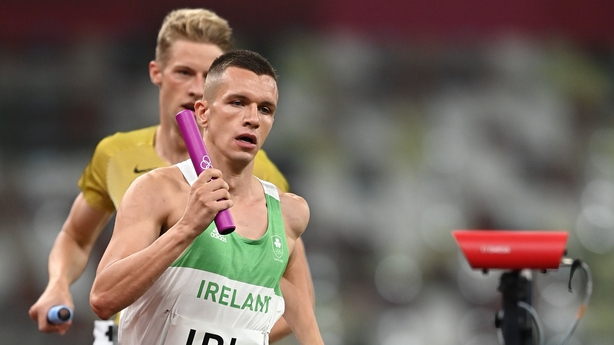 Anchor leg runner O'Donnell was modest after his blistering run, saying his team-mates had done the hard work.

"I had the easiest job, I just had to bring it home and give it my all. I love the challenge pressure of the last leg," he said.

"With 3:12 there is much more in the team, and one last roll of the dice tomorrow to do all the amazing supporters at home proud."

The Sligo man's comments were echoed back in the RTÉ Studio by Olympic medallist Rob Heffernan, who agreed that there is more in the team.

"They're there to compete, and they're raw and they're looking at the final," the former race walker said.

"I think there is more there," he said. "You don't know what's going to happen in the final, they could push on again."