Simone Biles has hit back at critics who claimed she quit after pulling out of the women's gymnastics team final on Tuesday after the first rotation.

The four-time defending Olympic champion subsequently pulled out of Thursday's all-around final which was won by her team-mate Sunisa Lee, and appears doubtful to take part in the four individual finals for which she has qualified next week.

Biles posted a now-deleted video on her Instagram Story of her making a mistake in training for the uneven bars, along with a message in which she sought to further explain the notion of 'twisting' - when a gymnast essentially loses their spatial awareness during a routine.

Biles wrote: "For anyone saying I quit, I didn't quit, my body and head are simply not in sync. I don't think you realise how dangerous this is on a hard competition surface.

"I didn't have a bad performance and quit. I've had plenty of bad performances throughout my career and finished the competition. I simply got so lost my safety was at risk as well as a team medal."

Biles said she started to feel the effects following last week's individual qualifying, in which she did not appear quite at her dominant best despite topping the all-around standings. 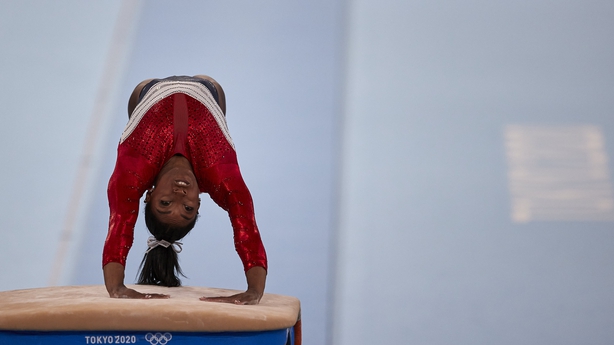 There were initial intimations that Biles may still compete in the beam and uneven bars finals, given it is on vault and floor that 'twisting' is considered most common.

However, Biles appeared to suggest her Games may be over, writing: "It has never transferred to bars and beam for me. This time it's literally in every event which sucks.

"(You) literally cannot tell up from down. It's the craziest feeling ever, not having an inch of control over your body.

"It's honestly petrifying trying to do a skill but not having your mind and body in sync."