They are the most coveted little disks in world sport and this morning Kellie Harrington provided Ireland's second gold medal winning performance at Tokyo 2020, after Fintan McCarthy and Paul O'Donovan became the first Irish athletes since Katie Taylor in 2012 to get their hands on an Olympic gold medal last week.

And take the obligatory bite, of course. 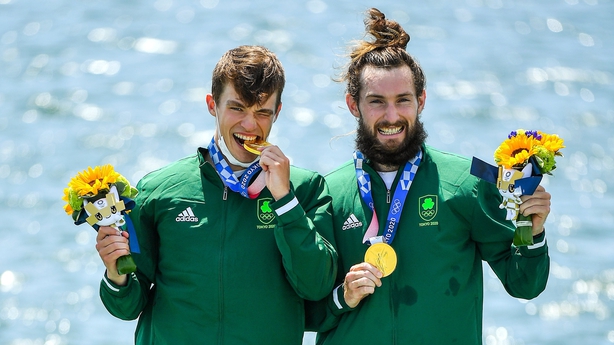 But what are Olympic gold medals actually made of?

Surprisingly, perhaps, they are not 100% gold and, for the first time, the Tokyo Olympic medals partly consist of recycled electronic devices.

According to the International Olympic Committee, while each Olympiad has some leeway in terms of design, they must include distinctive Olympiad elements like the five rings symbol, Greek goddess of victory Nike in front of the Panathinaikos Stadium in Athens and the official name of the respective Games.

As well as being the first time that medals have been manufactured with recycled metals from electronic devices, the Tokyo organising committee were also the first to consult the public in the design of the medals, via the Tokyo 2020 Medal Project.

The Tokyo medals feature the goddess Nike prominently in their design, but perhaps it is their composition that is of more interest.

All that glitters is not gold, and the same goes for Olympic gold medals, which are in fact at least 92.5% silver.

However that shiny, gilded gold exterior is real gold and all gold medals must contain at least six grams of gold. They must also measure at least 60mm in diameter and three millimetres thick.

Measuring 85mm in diameter, the Tokyo gold medals contain over six grams of gold plating on pure silver and have been valued at €700 due to the inflated prices of precious metals used like gold and silver.

The Tokyo versions presented to McCarthy and O'Donovan weigh roughly half a kilo (556g), with silver weighing 550g and bronze weighing 450g, and are 5% lighter than those minted by PyeongChang for the 2018 Winter Olympics in South Korea.