Brendan Hyland swam a season's best time but it wasn’t enough to qualify from the heats of the 200m butterfly event in Tokyo.

The time of one minute 57.09 seconds was Hyland’s second fastest ever on his Olympic debut and saw him finish third in the race.

The Dubliner will compete in the men's 4x200m freestyle relay tomorrow. 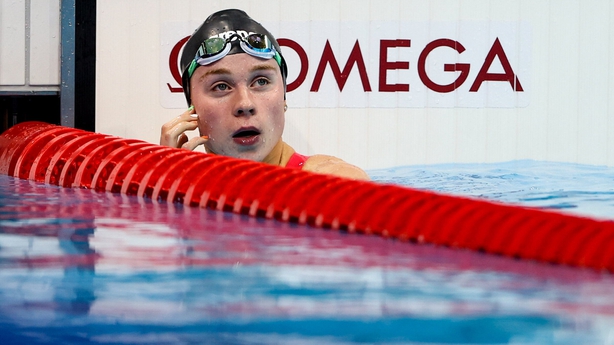 Ellen Walshe, meanwhile, missed out on qualification from the 200m individual medley.

A time of 2:13.34 from lane one saw the 19-year-old finish 19th overall, which was one better than her pre-meet ranking.

Speaking after his race, Hyland said he was "delighted" with his performance in Tokyo so far.

"I've actually only been quicker once, and it was two years ago," the Tallaght man said.

Hyland admitted that he "struggled" during the intervening period as Covid-19 restrictions impeded his training, but said he was happy to have experienced a "once in a lifetime" opportunity at the Olympics.

"I'm ecstatic. I literally watched the Olympics in 2004, I was a little kid and I watched [Michael] Phelps doing the 200m butterfly, literally eight years old and that's when I started dreaming of this mad sport that there is no background where I'm living, no family background."

Hyland, who also makes up part of the Irish 4x200m freestyle relay team, said that three weeks ago he was in the Aquatic Centre in Dublin "and thought this might be my last race" when he got the call to travel to Tokyo.

The Dubliner said he was looking forward to the relay race tomorrow, as well as to supporting team-mate Mona McSharry when she goes in the 100m breaststroke final.

"Mona, Mona is a superstar," he said, comparing her work rate and professionalism to Cristiano Ronaldo.

"She is phenomenal, she deserves everything she gets. She'll love it tomorrow and she'll smash it. She's deadly."