Ireland shipped three goals in the final quarter as a dogged performance was eventually worn down by the supreme Netherlands.

Felice Albers' eighth-minute opener look liked it might open the floodgates but Ireland - and the outstanding goalkeeper Ayeisha McFerran - held firm until the last 15 minutes.

Malou Pheninckx, Laurien Leurink and Frederique Matla all struck to put a gloss on the scoreline after a huge Irish effort.

"It's tough to take; we defended really well and I am proud of how everyone kept fighting to the end," McFerran said afterwards.

"I'm disappointed, particularly with the last goal and didn’t do myself justice in that one but overall the Dutch showed they are number one for a reason."

The Dutch are highly fancied to win gold in Japan and they started with real intent.

Four minutes in Margot van Geffen found space in the Irish box, and snapped a low shot goalwards that McFerran saved smartly with an out-stretched leg.

Soon afterwards Matla swept another shot goalwards with McFerran sticking up a padded paw to block.

The first goal, when it came, felt inevitable.

Katie Mullen, Sean Dancer and Ayeisha McFerran on the tough defeat against the Dutch and having to regroup for the Germany on Wednesday #Tokyo2020 #RTESport #Olympics @irishhockey pic.twitter.com/63LaWFiWN6

Ireland had mounted a rare foray into Dutch territory but as a result they were caught unusually short when the Dutch bounded upfield on the counter.

The ball was slipped to Albers unmarked inside the scoring circle, McFerran shot out to smother it but the Dutch player coolly nudged the ball by the Irish keeper and swept the ball into the empty goal.

There was no let-up.

Crisp and precise passing carved out another opportunity inside the scoring circle.

With McFerran out of the game after the initial shot was saved, Lena Tice had to rescue Ireland on the line, blocking away the rebounded shot. 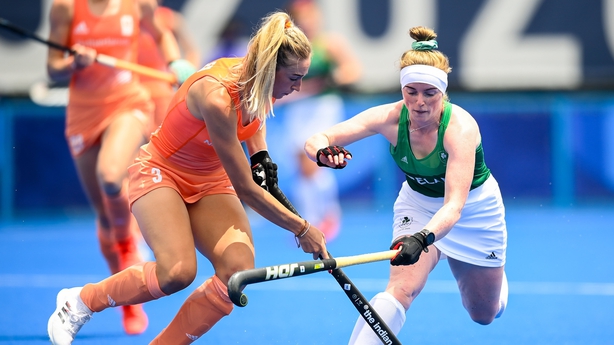 Ireland started the second quarter brightly but they were soon indebted to McFerran again for more goalkeeping heroics.

She denied Albers from inside the scoring circle and then produced a superb stick-stop after Matla arrowed in a penalty corner.

Ireland got to half-time still just one down and early in the third quarter they had a player advantage.

Shirley McKay hit the deck hard after Leurink ran over the top of her, with the Dutch player shown a green card and having to sit out the action for two minutes.

However, the numbers were swiftly evened up when Hannah Matthews saw green for a foul as the Dutch mounted a dangerous counter.

Inside the last quarter tired Irish legs finally told. From a penalty corner, a low shot smacked off the post and rebounded to Pheninckx, who controlled and snapped a shot away that squeezed home.

Then Leurink controlled at the far post and coolly scooped the ball into the net before Matla's mis-hit shot looped over McFerran's leg.

Sean Dancer's side beat South Africa in their opening game and face Germany on Thursday at 4.15am.