This coming Friday we should be celebrating the opening of the Olympic Games in Tokyo. The Games were to be an exciting journey following the fortunes of the Irish athletes as they pursued their Olympic dreams. One hundred years ago, the Irish had a different dream.

Against  the backdrop of the War of Independence, the rebel Irish republic looked to compete at the 1920 Olympic Games in Antwerp as an independent nation for the first time. As the war raged on across the country, the Irish were also battling to seek recognition from the International Olympic Committee.

Ireland in 1920 was a country straining with unease and tension as hostilities began to escalate. That summer also saw the return of the Olympics Games having being interrupted by the Great War.

Always looking for an opportunity to promote itself as an independent country, the Sinn Féin breakaway government looked to send a team to Belgium to represent an independent Ireland for the first time.

Before this, Ireland had competed under the British flag, and therefore medals won by Irish athletes were attributed not to Ireland, but to Britain, while the Union Jack flag was hoisted at the medal ceremonies often to the annoyance of the Irish athletes.

One standout case came in 1906 at the Intercalated Games in Athens. Peter O'Connor, who had placed second in the long jump, actually climbed the pole to take down the British flag while guarded by compatriot Con Leahy and attempted to replace it with an Irish Erin go Bragh flag.

Being unable to represent Ireland meant that many of our finest athletes either immigrated, usually to America, or simply refused to compete on the international stage.

Having received no political support at the post-war Versailles conference or from President Woodrow Wilson in the United States, the Antwerp Games seemed like the perfect place to announce the new nation of Ireland on the international stage. Leading the campaign was John J Keane.

Keane was the perfect choice. From County Limerick originally, he moved to Dublin as a young man to work as a corn merchant. He helped set up the Geraldines GAA club and they quickly became one of the strongest teams in the county, winning back-to-back county football championships in 1898 and 1899, with Keane a member of the team. They would go on to win two Leinster titles and two All-Ireland titles.

At the same time, Keane was heavily involved in athletics. He was an Irish hurdles champion in 1900. He did more than compete - he was an excellent sports administrator and was president of the Athletic Council of the GAA from 1910 to 1922 at a time when the GAA was a prominent organiser of athletics meetings on the island.

Keane set up and became chairman of the Olympic Council of Ireland in 1920 and sought to get Ireland into that year's Olympics. 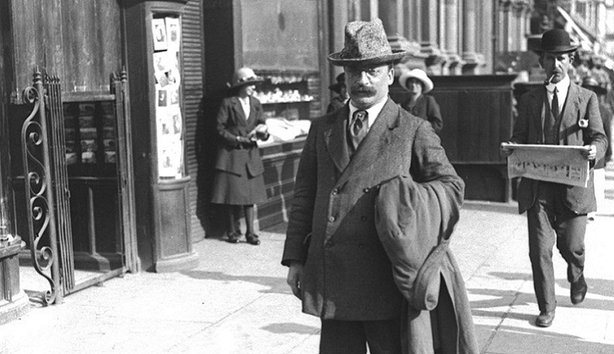 He had the full support in his aims from the Sinn Féin government. He met with Michael Collins and Arthur Griffith (pictured) to discuss the idea and both saw the potential value of sending a team. Griffith had always advocated the Irish Olympic cause, while Collins lived very close to the White City stadium where the 1908 Olympics were staged during his time living in London, so no doubt he was aware of the impact the Olympics could have. Keane now had to convince the IOC.

There was mixed signals from Olympic governing body. Ireland - under the British flag - had been allowed send teams to compete against the other home nations in hockey and polo in 1908. In 1912, Ireland was allowed send a cycling team to Stockholm.

Other disputed territories at the time, such as Bohemia and Finland, had been granted the right to compete. Empire countries, such as Canada, Australia, New Zealand and South Africa were allowed compete.

In 1913, there were reports that Ireland was to be allowed compete separately at the upcoming 1916 games in Berlin, but by 1914 the rule changed, and only political nations were allowed take part, meaning that Ireland would be forced to compete under the British flag. In any event, the Great War intervened and the 1916 Games were cancelled.

With the Great War over and the rise of self-determination for nations, the Irish felt justified in thinking that they could take their place among the nations of the Games. There was a certain confidence in the Irish press as Keane campaigned for Irish recognition. 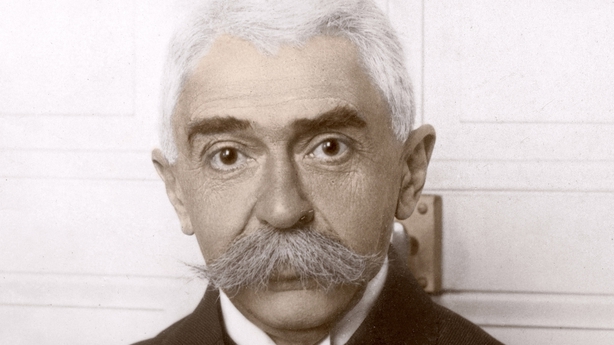 Unfortunately, the IOC was a conservative organisation slow to change. Keane wrote to Pierre de Coubertin (pictured), head of the IOC and founder of the modern Olympics, who was sympathetic to the Irish claim, but he passed judgment over to the Belgian organising committee, who in turn passed the decision over to the British Olympic Association. Unionist in outlook, it was never going to support an independent Irish team.

The BOA was a powerful bloc in the Olympic movement. De Coubertin needed the support of the British and didn’t want to upset them, so Ireland was always in tricky situation.

The compromise of an Irish team competing under the British flag was dismissed. With the political upheaval in Ireland, the IOC found a ready excuse to reject the request, stating that it would wait for the outcome of the war before making a decision. Keane and the Irish would have to wait.

The delay of four years would prove significant for many Irish-born athletes, as by 1924 the golden age of Irish athletics had passed.

When the Olympics was revived in Athens in 1896, the Irish Amateur Athletic Association and the GAA had considered sending athletes, but declined due to financial constraints. If they had, given the prowess of Irish athletes at that time, they surely would have secured a number of medals. Disputes between the two organisations would continue to prevent most Irish-based athletes from attending future Games. Keane was often involved in both internal and external disagreements.

The Games continued to grow in stature and leading Irish athlete Tom Kiely self-financed his trip to St Louis in 1904 to prove his worth. The trek was rewarding, with Kiely winning the coveted all-round champion gold medal in an event now known as the decathlon, with the victory dedicated to Tipperary and Ireland. Yet his medal is still attributed to Great Britain.

By the London Games of 1908, Ireland was a dominant force in the field events, such as the hammer, discus and shot put.

The Irish Whales, as they were known, were mainly associated with the Irish American Athletic Club in New York. Men such as Martin Sheridan (Mayo), Matthew McGrath (Tipperary) and John Flanagan (Limerick) were among the heavyweights. Working as New York coppers during the week, athletic champions by weekend, they became heroes of the Irish-American community.

The club was so strong, that at the 1908 Games it won 10 of the 23 gold medals which the US claimed. The achievement would have secured third spot on the table for gold medals behind Great Britain and the USA, had the club been a nation. These were heady days for the Irish-American athletic community, but just 10 years later the club would be gone, disbanding when the United States entered the Great War.

When the 1924 Olympics in Paris rolled around, Ireland was finally free to enter as an independent nation. The Olympic Council of Ireland became affiliated in June 1922, with Keane becoming the first delegate. The IOC was also keen to get the Irish onside when it learned that Ireland was setting up the Tailteann Games, an international athletic event, which it saw as a threat.

Keane was also involved with the Tailteann Games, which the Irish Free State hoped would promote the new country, along with Irish identity and culture. The games were organised to take place just weeks after the Olympics, in the correct assumption that it would attract some of the best athletes as they returned home from France. 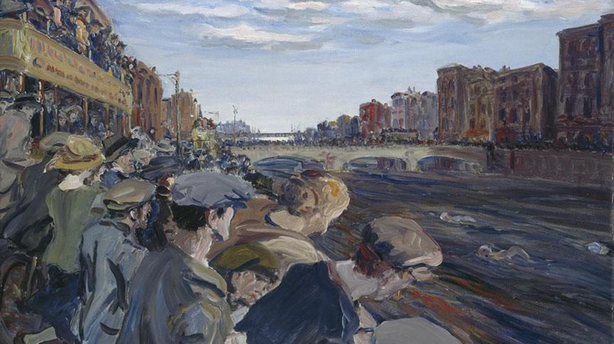 Despite Irish athletic successes for other nations in previous Olympics, the first Games as an independent nation returned no athletics medals, but Ireland did win two medals in the artistic competitions. Jack Yeats landed a silver for his painting Swimming/ Liffey Swim, which now hangs in the National Gallery of Ireland in Dublin, and Oliver St John Gogarty bagged bronze in literature for Tailteann Ode.

The main highlight from an Irish perspective was seeing the national football team taking the field in what is now recognised as the first international game for the Republic of Ireland. The team composed from League of Ireland players beat Bulgaria in their opening game in the straight knockout format, but they subsequently lost to the Netherlands after extra-time in the quarter-finals.

If we could add in the medals won by Irish-born athletes in the pre-independence period, the overall total would increase quite substantially to 84 medals.

It is unfortunate that those athletes, many of whom longed to compete for Ireland, weren’t able to see the Irish flag fly high and proud as the medals were presented to them.

Samuel Kingston is a freelance TV producer, writer and local historian from Clonakilty, west Cork. He is currently writing a book - The Sporting Irish - which tells the story of the Irish impact on sports around the world. 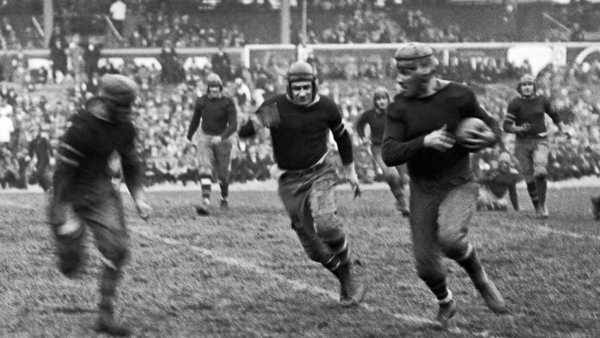 Joseph Carr: The Irish driving force behind the NFL