The games begin tonight on RTÉ2 at 10pm with live coverage of the Opening Ceremony from the Maracana Stadium in Rio.

Each evening Joanne Cantwell and Daráine Mulvihill will present Paralympics 2016 with a mixture of highlights and live coverage of the Irish in action plus the best of the games from Rio. 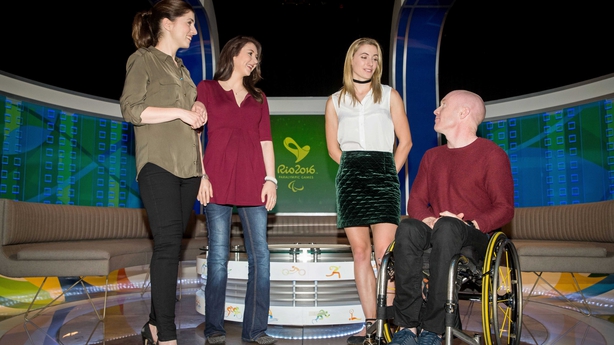 All times and schedules are subject to change and are dependent on the progression of Irish athletes.

RTÉ television News will have a round-up of Irish involvement and other major events from the Rio Paralympics each day on RTÉ Six One and Nine O'Clock News television bulletins.

Radio Sport will bring you the stories of the Paralympics each day from Morning Ireland through until late in the evening with updates on our sport bulletins on RTÉ Radio 1 and RTÉ 2FM through the day and night - including on Morning Ireland, Today With Sean O'Rourke, News at One, Drivetime, Game On and late into the evening.

RTÉ Radio 1 will also carry a number of the finals and medal events of Irish interest live in our regular programming as they happen.

RTÉ Raidió na Gaeltachta will also be carrying coverage of the Paralympics on their sports bulletins throughout the day, and also on weekend sports programmes.

While RTÉ2 will be the home of Rio 2016 Paralympic Games on television this year all of the content will also be available to viewers in the Republic of Ireland on RTÉ Player.

The RTÉ News Now app will have a dedicated Paralympics 2016 news section.