Having become the first Irish man to reach the final of the 400m hurdles at an Olympic games in 84 years, Thomas Barr believes the event is wide open.

The Waterford runner won his semi-final late on Tuesday night, or early on Wednesday morning depending on your outlook, to reach the decider.

In the process, he also knocked 0.26 seconds off his own national record, setting a new mark of 48.39 seconds.

Speaking to RTÉ Sport after the race, Barr admitted his achievement "hasn't sunk in" yet.

Having put the demons of an injury-ravaged season to bed with a fine performance in his heat, where he clocked what was at that point a season's best of 48.93 seconds, the Ferrybank athlete felt the pressure was off somewhat.

"Yesterday I was a lot more nervous because I was in the unknown.

Having missed much of the early part of the season due to injury, Barr ran 50.09 seconds in a semi-final at those Europeans, failing to make the finals.

Since then he has finally been able to put in a sustained period of training and the benefits are clear to see.

"Nothing has changed, I think I've just started to find my rhythm again. I started to run relaxed," he says.

"I was getting my starting three hurdles right, and everything just came together within the last couple of days." 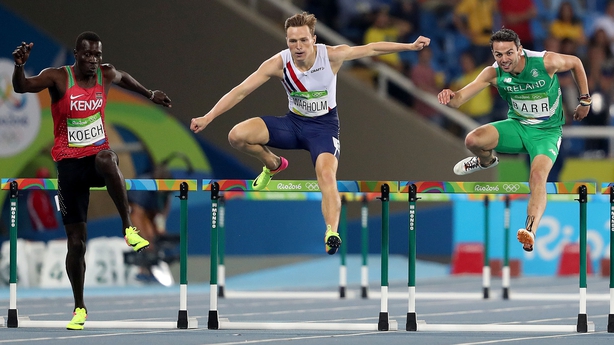 As well as things coming together on the track, Barr added that they have come together off of it as well.

"I came into this really relaxed because there was no target on my back, no pressure. I think that definitely helped on the mental side of things."

The race itself was a perfect example of a well-timed and well-executed run by the University of Limerick student.

Having started out well, Barr was sitting just outside of the two automatic qualification places coming onto the home straight.

However, as he says himself he knew he had a strong finish and used that to his full advantage.

"I didn't panic, I stayed relaxed around the top bend and came up on hurdle eight and nine and knew if I can nail these again I have this."

"I came into this really relaxed because there was no target on my back, no pressure"

Nail them he did, but he still needed to dig deep in order to ensure qualification.

"I found something in the back of my head that said if I don’t kick on I’m not going to get to the final so that was enough motivation," he says.

With qualification for the final secured, Barr's plan is simple - "go home, relax and get a good night's kip."

Wednesday will involve some physio as he attempts to refocus ahead of the biggest run of his career.

At 4pm on Thursday, Thomas Barr will seek to become the first Irish man since Bob Tisdall to win Olympic gold over the 400m hurdles.