Usain Bolt has his eyes on retaining gold when he lines out for the 100m semi-finals at 1am tomorrow morning, followed by the final at 2.25am.

The Jamaican looked impressive in the heats of the 100m yesterday as the world's fastest man finally brought the crowds to Rio's Olympic Stadium.

Bolt, in Brazil to complete the 'triple triple' of Olympic sprint titles, admitted he was "sluggish" out of the blocks, but was still comfortable enough to look across to check his position by halfway and shut down well before the line.

He came home in 10.07 seconds as his American rival for gold, Justin Gatlin, was the fastest qualifier overall in 10.01s.

"I'm happy to get the first one out, it felt okay," said Bolt. "It wasn't the best start. Hopefully tomorrow I can go much smoother, I'm feeling good, I'm happy.

"Now it's all about execution and getting it right when it comes to the final."

The 29-year-old, though, clearly looked to be feeling no lingering ill-effects of the hamstring strain which forced him out of the Jamaican trials, while the rustiness he spoke about after his last appearance before the Games, over 200m in London, was also far less evident.

Bolt had taken to social media ahead of the Games in a bid to drum up ticket sales and, after the opening day of action on Friday was watched by pitifully few spectators, far more flocked to the 56,000-capacity stadium to watch the sport's great entertainer, even if it was still far from a full house.

In the last week, as the circus that surrounds Bolt has rolled into Rio, he has strutted his stuff with scantily-clad samba dancers and been serenaded by a Norwegian journalist-cum-freestyle rapper.

On the track, though, he means business. Looking relaxed, he applauded all sides of the stadium when he came out, but there was no joking around when introduced to the crowd on the start line. Just raised arms and another clap.

There were no boos from the crowd when Gatlin, the two-time drug cheat, was introduced, though.

"Every Olympics is special," said the 34-year-old who won Olympic gold 12 years ago in Athens.

"As you become a more seasoned athlete you understand the importance of running at the Olympics."

There was mixed news on the British front, with Chijindu Ujah breezing into Sunday's semi-finals in 10.13s and James Dasaolu joining him as a fastest loser after clocking 10.18.

But James Ellington crashed out thanks to a time of 10.29. 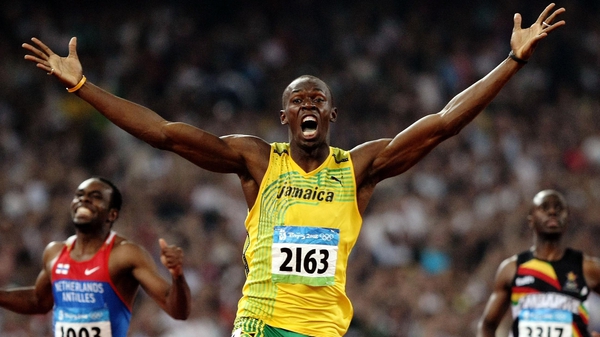