Rower Sanita Puspure missed out on a place in the single sculls semi-finals by just .65 of a second in Rio.

The 34-year-old finished in fourth place, with only the top three qualifying, in what was regarded as the toughest heat.

The Cork-based woman looked completely out of contention after the halfway mark, trailing the third-place Belarusian rower by a length and a half. 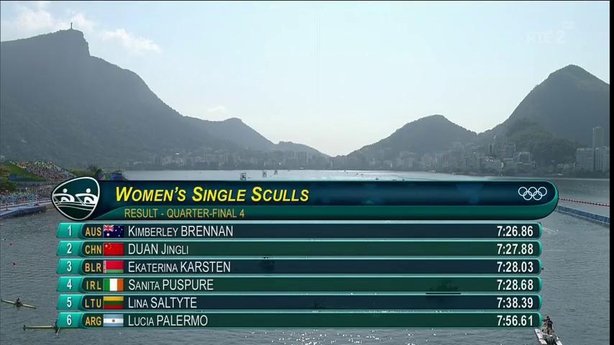 With just 500m to go she seemed to be labouring but surged late on, almost closing a significant gap to agonisingly miss out on qualification by .65 of a second.

The time of 7:28.68 would have been good enough in any of the other three heats.

She can still row in the C & D final but that will prove little consolation. RTÉ analyst and double Olympian Neville Maxwell said it was "four years down the drain".

Puspure misses out on semi-final spot - 'She just ran out of water' https://t.co/cBPRMVLCO1