The final piece of gymnastics action at London 2012 did not disappoint, with Russia scoring 28.700 in their five balls routine before 28.300 with the ribbons and hoops earned them a total of 57.000 to retain their title.

It means the country has won gold in every Games in both the individual and group rhythmic events since the Sydney Olympics in 2000.

The defending champions were the first to compete with five balls and set a huge marker, beating their score in qualification where they finished in first place.

Italy were next and they produced a dazzling performance full of intricate work to slip into second with 28.125.

Belarus, the third-place qualifiers, displayed a much more balletic and lyrical routine in contrast, and the reigning five balls world champions scored 27.825 to move fourth after one rotation.

Ukraine then launched an inquiry following their 27.200 score, which was rejected, with Spain, Japan and Israel producing good routines as Bulgaria moved to third.

Spain were the first to compete with two hoops and three ribbons at the start of the second and final rotation and moved into top spot before Bulgaria saw their medal hopes slip away with a below-par performance.

Japan and Israel impressed but did not have enough difficulty to challenge for a medal as Spain launched an inquiry, subsequently rejected, in a bid to boost their score.

Russia then took to the floor for their second routine and produced a scintillating and innovative performance to fire to the top of the leaderboard.

Italy were next and moved into second place with 27.325 for their efforts before Belarus mounted their challenge with a strong performance.

They leapfrogged Italy and Spain with a score of 27.675, beating their qualification mark by more than a point, to claim silver.

It pushed Italy down into bronze medal position as Spain slipped out of the top three. 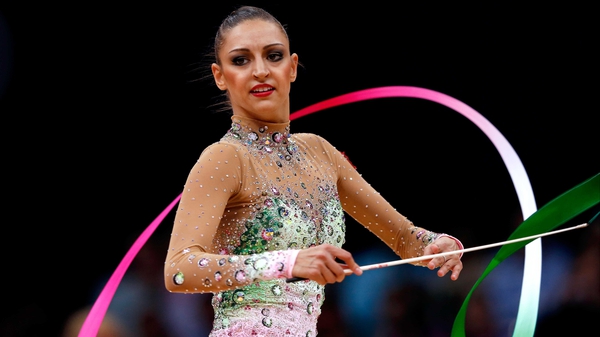