Ireland’s Katie Taylor completed a lifetime dream by winning an Olympic gold medal when she beat Russia's Sofya Ochigava 10-8 in the women's lightweight final at the ExCel Arena.

Cheered on by a capacity crowd, that surely broke the decibel level record at the London 2012 Games, Taylor had to dig deep against an opponent who had previously beaten her.

Unlike Taylor's quarter-final bout with Natasha Jonas, this was no classic, as Ochigava's spoiling tactics and counter-attacking style troubled the Bray woman, who trailed 4-3 at the end of the second round.

Nevertheless, Taylor dug deep and rallied in the third round with the kind of precision boxing that has made her a four-time world champion.

And although she had to endure a tense wait at the end of a tough fourth round, the referee duly raised her hand to spark off wild celebrations and emotional scenes throughout the arena.

A calm and confident Taylor entered the ring to unbelievable support from a crowd that had the likes of Dara Ó Briain rubbing shoulders with Princess Anne - who was forced to cover her ears such was the noise.

The ring announcer could barely be heard over the din of Taylor's supporters, but a calm and confident Sofya Ochigava did not look flustered, despite some unsporting booing as her name was announced.

Taylor was bouncing on her toes from the start and was the immediate aggressor, feinting with her left jab and using it to create room for her right hook. The Bray woman suffered an early slip in the clinch but a slip is all it was and there's no bonus point for Ochigava.

"It's what I've always dreamed of. I've envisaged this moment so many times before but it's better than all my wildest dreams to be sitting here as Olympic champion" - Katie Taylor

The Russian, known for her defensive tactics, was happy to invite Taylor on and caught her flush with a powerful right, but the Bray woman hit back with a looping left before ending the round with a powerful flurry on the bell that Ochigava did well to block.

A scoreline of 2-2 was a fair reflection of the opening round and Ochigava, encouraged by her early success, loosened up slightly, going after Taylor and catching her twice in quick succession with her left hook.

The Russian southpaw then reverted to form, slowing down the pace of the fight and disrupting Taylor's rhythm with a series of clinches and awkward non-scoring jabs that had the Irishwomen struggling.

Taylor managed to land a scoring blow just before the bell went, but there was real concern among the Irish supporters as the scorecard read 4-3 in the favour of Ochigava.

Determined not to allow Ochigava the chance to continue dictating the pace, Taylor made early gains in the third, catching the Russian with her right hook twice in quick succession.

The Bray fighter followed that up with a left jab and a right hook that both looked like scoring before the Russian hit back with a powerful-looking body blow.

Both fighters got a well-earned breather with 30 seconds to go in the round as Ochigava's equipment needed attention, and that break killed the momentum of the round, which Taylor was in danger of running away with.

Nevertheless there where huge cheers when the bell went and the scorecard showed that Taylor had punched her way to a 7-5 lead.

Trailing going into the final round, Ochigava finally left her counter-punching style behind her and opened the round with a massive haymaker that Taylor did well to avoid.

Taylor then went to work on the body of her opponent, before the referee rather harshly broke them up and indicated that she had called for a break.

Ochigava then looked to have scored with a left on the counter, and after a clinch, she appeared to catch Taylor with a booming right that forced a stumble. To her credit Taylor recovered immediately and disguised it as a slip and there was no standing count.

An increasingly desperate Ochigava pushed forward in the closing minute, throwing as many punches as she had in the first two rounds, and even Taylor was working well behind her defence and blocking well, she was still getting caught.

Taylor hit back with a scoring left just before the closing bell, but there was still an almost unbearable wait and what seemed to be a prolonged delay, sparking concerns that it may have been a countback, before the referee raised her hand to send the crowd in attendance and those watching at home into rapture. 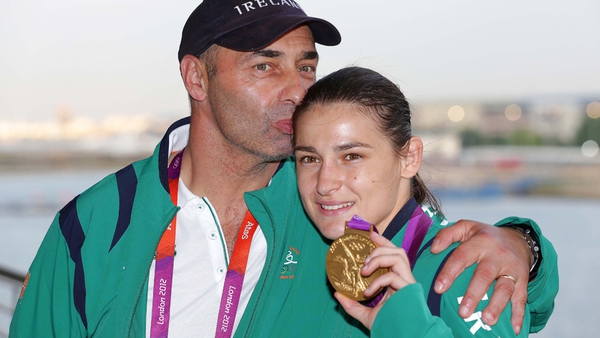