The decibel level during Katie Taylor’s fight with Natasha Jonas this afternoon hit 113.7 – the highest recorded at London 2012 so far.

An International Olympic Committee official said the noise surpassed the sound recorded during GB's win in the cycling finals at the Velodrome last week.

The noise of a jet engine is around 140 decibels.

When Taylor's name was mentioned for the first time a full 90 minutes before her fight, London's ExCel boxing arena shook with a roar that one Irish fan said could even be heard at the nearby wrestling arena.

Inside the arena, fans witnessed the best atmosphere at a fight at the Games so far, as the crowd exchanged chants of 'Team GB and 'Ole, Ole, Ole',

While British fighters have boxed in front of partisan crowds every day so far, Jonas' supporters were vastly outnumbered and outsung by the Irish fans, with a huge number of tricolours to be seen around the venue.

Back home, more than 6,000 boxing fans lined Bray seafront to see Taylor guarantee at least a bronze at the Olympics.

There was a great atmosphere as the champion fighter's Olympic debut was shown on an open-air big screen.

The boxer looked every inch a gold medal winner in waiting. She was briefly troubled in the second round but extended her advantage in a final two-round battering that saw Jonas receive two standing counts, thanks to a couple of thunderous right hands from the Bray boxer.. 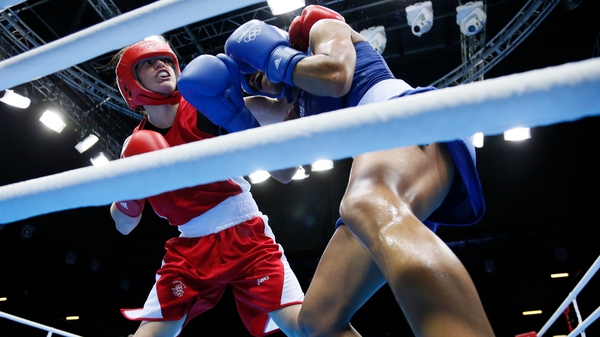