Ciaran O’Lionaird reached the 1,500m final at the World Championships in Daegu, South Korea, last season; however, an Achilles tendon injury in March has blighted his preparation for London 2012.

But the middle-distance runner made a return to the track at the Cork City Sports last Tuesday week, and felt good after his time out of the sport, finishing fifth in the mile race in 3 minutes 58.84 seconds.

“My legs felt really good actually. The race pace itself felt quite easy, but I was running like a rookie out there the first lap, stumbling over myself and such,” said Corkonian O’Lionaird.

“I was able to settle and move up and thought about making a move for the lead with 500 to go, but held off for the home straight.

“By that point though I had some lactic [acid] and when I went to pull the trigger there was nothing there.

“That will come. For a rust buster I'll take a 3:58 mile, especially when just running five-minute-mile pace was a big achievement not six weeks ago.”

Making the final at London 2012 would be a huge achievement, given his time away from the track, and O’Lionaird is keen to take things one step at a time.

“I'm going to take it round by round. In fact, right now I'm just trying to progress each day with as little pain as possible and keep improving towards the Games,” said the 24-year-old.

“Will I have the skill set in my repertoire that I require to make the final? It's difficult to say.

“I'll be the best I can be under the circumstances and beyond that I'm not going to worry too much. What my competitors bring to the table is out of my control. I'm just excited to be competing again.” 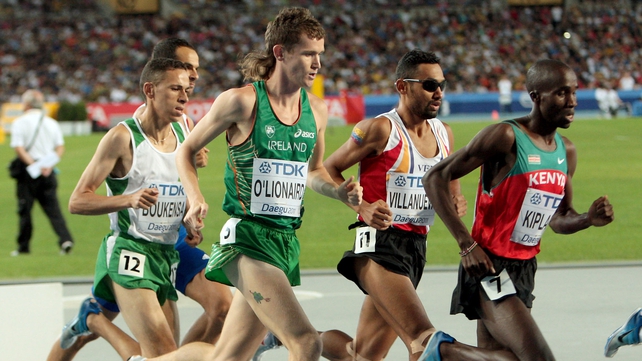 The pressure on athletes at World Championships and Olympic Games is much discussed and often cited as a key factor in athletes crumbling when it matters most. However, like his Team Ireland team-mate Olive Loughane, O’Lionaird says pressure is not something that concerns him.

“I actually found the worlds last year to be quite relaxed and low-pressure,” said O’Lionaird.

“I had pretty much expected to be finished running last year after college as I had gone through some fairly serious injuries, and was effectively running just to honour the commitment FSU made to me in providing me with an opportunity to get a masters degree.

“I managed to string a few months of injury free running together in 2011 and got the Olympic qualifying time and from there just went out to have fun.

“I feel like I have nothing to lose. I never planned on full-time running and can stop or put it away whenever I feel like it so that allows me to run without a lot of pressure”

“I feel like I have nothing to lose. I never planned on full-time running and can stop or put it away whenever I feel like it so that allows me to run without a lot of pressure.”

In the cut-and-thrust world of athletics and top-level sport, O’Lionaird gives some very interesting advice to aspiring track athletes in Ireland.

“Just relax and enjoy yourself. I often find runners in Ireland to be very serious, watching what they eat and when they go to sleep and such,” said O’Lionaird.

“You need common sense with this stuff, but a happy runner will run faster so one should not deprive themselves of things.

“A few beers after a workout or on the weekend, or a pizza, doesn't make a difference so long as you take care of your business.

“The other thing is consistency. No one workout will make or break you. It's months and years of building up and I'm still adapting my mindset to fit this notion”

“The other thing is consistency. No one workout will make or break you. It's months and years of building up and I'm still adapting my mindset to fit this notion.”

Like 3,000m steeplechaser Stephanie Reilly, O’Lionaird went to the US on scholarship to train, and cannot speak highly enough of his experiences at Michigan and Florida Universities.

“It helped me develop as a person, which allowed me in turn to be more mature and relaxed in my approach to athletics,” said O’Lionaird.

“I definitely learned some hard lessons from injuries, but also made some of my very best friends and was immersed in some of the most competitive athletic and academic programs out there.

“Florida State in particular took tremendous care of me and I owe Coach Braman so much for keeping faith in me as an athlete and as a student.

“He believed that even as a broken runner that I could turn things around and excel on the track and in the classroom.

“Without that belief I'm not sure where I'd be. I was taken care of very well by Florida State.”