Irish 3,000m steeplechaser Stephanie Reilly, 12th in the European Championships last year, has stated that making the final at London 2012 is her aim.

“The European Championships were a fantastic experience. I had targeted making the final a year ago and to see it come to fruition was very exciting,” said the Wicklow woman.

“The experience I gained from two years ago in Barcelona (where O’Reilly came tenth in the heats at the Europeans) and the World Championships last year in Daegu (eighth in the heats) really stood to me.

“I can honestly say that a medal at the Olympics is beyond me. I believe that we need to celebrate success on a broader scale than the definition of medals.

“The Olympics is the culmination of talent and dedication for the best athletes in the world, so to even participate is a huge success.

“Athletics is truly a global sport with participants from just about every country. It doesn't cost a lot of money to run, which makes it even more competitive.

“I’m looking forward to chasing a qualifying spot for the final.

“I expect that it will take a time of around 9 minutes 30 seconds to get to the final, but I am certainly in the best shape of my life and feel that I have really made significant improvements from the Europeans last month.” 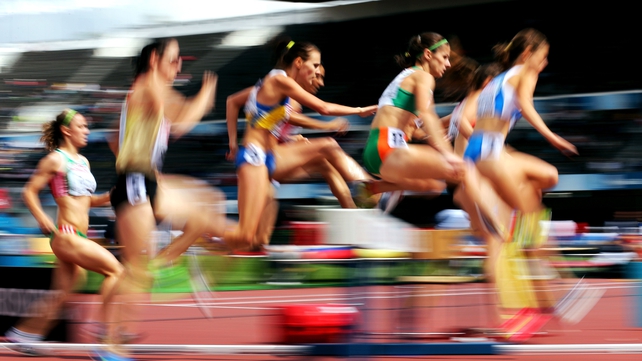 Reilly also revealed to RTÉ Sport that reaching an Olympic Games is an achievement in itself for the athlete.

“As an amateur athlete working full time, and raising a family, qualifying alone for an Olympic games is a dream come true,” Reilly explained.

“It is a once in a lifetime opportunity. I have worked very hard and committed myself to my athletics while managing a hectic lifestyle.

“My goals could not have come to fruition without the support of my husband and family.

“They have kept me grounded and help me keep my running in perspective. When I was a kid, I remember watching the Olympics and supporting the Irish athletes.

“The Olympics is something that everyone can get their head around and it brings the best athletes together, not just in athletics, but in many sports.”

Reilly went to Providence College, Rhode Island, on an athletics scholarship in in 1997 and has gone on to coach in the US. The women who started her athletics career with Dee Athletic Club cannot speak highly enough about her experience in the US.

“My career as head coach for cross country and track and field at Bryant University, as well as my collegiate experience in the US, has had a huge positive impact on my running,” said Reilly.

“Although a very demanding and busy career it allows me to train with flexibility. I truly love the sport of track and field and to be able to compete at the highest level and work in the same field is incredible.

"The seasons are quite well defined in the north-east of America so I am able to adjust and get varying types of training done at different times of the year. I like the variety of outdoor and indoor track, road racing and cross country"

“The seasons are quite well defined in the north-east of America so I am able to adjust and get varying types of training done at different times of the year. I like the variety of outdoor and indoor track, road racing and cross country."

The athlete also opened up about her weekly training regime in the build up to the Games, and gave some words of advice for athletes dreaming of making a future Olympiad.

“I run an average of 65 miles per week. This includes two days of hard interval work on the track, two days of long runs (approximately 12 miles), and three recovery days of shorter runs," she said.

“I also do core work twice a week and yoga once a week. One of my sessions on the track incorporates intervals over hurdles.

“Sessions differ over the course of the year in speed, duration, and recovery length depending on the goals I have set with Paul, my husband and coach.

“Consistency is the absolute essential component of training and competing at a high level. We strongly believe in preparing over the long term and that is something I would advise for young athletes," added 34-year-old Reilly.

“I think I am a great example of this. For the Olympics, we have already started to taper training. I will do shorter runs and the workouts will not be at the same intensity. I’m excited and ready for the Games and looking forward to racing against the best in the world.”