The week ended as it began, with Giovanni Trapattoni and Marco Tardelli being feted by the people of Montecatini, this time with plaques on the town's 'walk of fame'.

The event featured a lengthy, and at times bizarre, question and answer session, hosted by Italian football journalist Alfio Tofanelli in front of the town's main church.

Just as Trapattoni and Tardelli were being asked about their career highs and lows, a grey-haired woman came bounding out of nowhere to interrupt proceedings.

Alas, the excitement of meeting one of her heroes got the better of her as she surged towards Trapattoni, causing her to trip on the stage and smack her head off the sofa they were sitting on.

A concerned Trapattoni leapt to her aid and hauled her to her feet, before happily posing for a photograph and sending her on her way. Trapattoni and Tardelli are clearly very popular figures in their homeland and the madness did not finish there.

As the event ended, the crowd of several hundred gravitated towards Trap to get a word and or shake his hand.

The scrum then made its way to a police car waiting to take the two men to the second part of the ceremony further up the town.

Chaos ensued as the jostling crowd moved right into the path of dozens of local runners competing in an 8km race around the town, the Terme Di Sera Run. It was a calmer atmosphere as Trapattoni and Tardelli laid their plaques along the red-cobbled walkway, close to Pelé, and Italian World Cup-winning managers Marcello Lippi and Enzo Bearzot.

"It's been nice, apart from the earthquake," were the thoughts of Richard Dunne earlier in the week when asked to describe this Tuscan trip. Trapattoni later described it as a "beautiful week".

Kevin Foley might not see it that way, but the remaining players have, publicly anyway, moved on from that issue in the second part of the week.

While his close friends in the squad may be saddened by Foley's shock departure, they cannot afford to dwell on it, as there is a major championship around the corner.

Irish football was hoping this would not be the earth-shattering week that Saipan had been in 2002. The feeling is that it has been a positive seven days and the FAI has been absolved from any blame over the actual earth-shattering events.

The hot and humid conditions have not hampered the team's training and the players have looked sharp in several intense sessions.

The final session of the week on Saturday morning saw some tremendous finishing from Simon Cox and Stephen Hunt, which drew rounds of applause from the locals in attendance.

Only Paul McShane's face stopped Sean St Ledger's spectacular volley finding the top corner. The force of the shot saw McShane hit the deck for a moment but he recovered to finish the session.

Glenn Whelan later got in on the act with a cheeky nutmeg on Stephen Kelly. The defender was embarrassed when Whelan used the sole of his foot to roll the ball through his legs. It's often difficult to learn anything from these training sessions, as much of the work is done while fans and media are locked outside the gates.

On Friday, there were some clear indications of Trapattoni's thinking, with the likely first choice players playing together against the others in an 11-a-side game.

A penny for Hunt's thoughts as he was forced to play left-back on the other team, not to mention getting a chasing from Damien Duff, as James McClean now looks like the back-up winger.

The players and the trailing media have now left Italy for the next leg of the trip in Hungary, where a tough test awaits and the pressure increases as the tournament draws near. 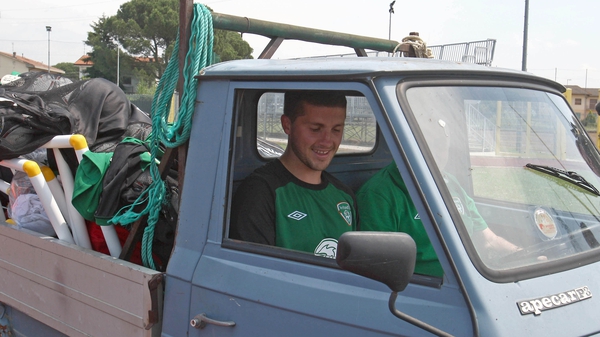