Canada moved top of the Olympic gold charts with two days to go on Friday and their beloved ice hockey team got out of a close scrape to set up a mouth-watering closing day final with arch rivals USA.

Another Canadian with a, newly won, cult following also found herself in a tight spot as more gold looked there for the taking but for once the coolest hand in women's curling took aim - and missed - in a heart-stopping climax to the final with Sweden (7-6).

‘You could not ask for an easier shot,’ said tearful skip Cheryl Bernard after missing the opportunity to knock a couple of Swedish stones out with her final effort.

It was also a day when a Canadian with an amorous side once he wins slid to two golds in the rough and tumble sport of short track and a Norwegian biathlon and Chinese short track skater proved themselves masters of their disciplines.

Bernard looked sure to show herself mistress of hers too. The 43-year-old darling of curling is so renowned for her accuracy that she is known as ‘last shot’ because she usually makes that one pay with defeat for her opposition.

‘I rubbed it. I missed it by millimetres.’

The loss of gold in the temple of curling piled pressure not only on Canada's unbeaten men's team in the final against Norway on Saturday but also on the other Winter Games sport in which Canadians demand dominance - ice hockey.

The Canadian men, supposedly destined to claim gold in Sunday's Games finale of a sport which is more akin to religion here, nearly fluffed their lines too and it was a mighty close run thing against unheralded Slovakia who battled back from three down before the hosts prevailed 3-2.

Slovakia really made them sweat in the closing 10 minutes of play, and especially the final seconds when they swarmed the Canada net forcing several great saves from the home team's last line of defence.

‘You have to give them a lot of credit, they didn't quit. It was great to see that buzzer go off,’ Canada forward Jarome Iginla said. ‘It got pretty intense there the last 30 seconds.’

Gold in men's ice hockey may be the only medal of interest to millions of Canadians who grow up on the sport, but success on another type of ice is what put Canada in charge of their own Games.

Hamelin then led the Canadian men to another gold in the 5000m short track relay and more kissing ensued.

Canada, who only days ago were lamenting their lack of medals, stood alone on top of the standings with 10 golds, ahead of Germany on nine and the US and Norway with eight apiece.

It was also a landmark day for China's short-track skater Wang Meng, who became the second woman at the Games to win three golds with victory in the women's 1000m. Chinese women won gold in all four short-track events.

‘I don't feel these three gold medals belong to me. What is important is that the Chinese short track team has won (four) gold medals,’ said Wang.

American short-track skater Apolo Anton Ohno's team got a bronze in the men's relay, giving him his third medal of these Games, none of them gold, and his eighth in three Olympics.

With only two days left in the Games, nasty weather wreaked havoc on some of the final medal runs.

German skier Maria Riesch grabbed her second gold medal of the Winter Olympics in the slalom on a snowy and foggy Whistler mountain, while her friend Lindsey Vonn went out with a whimper on snow which she said did not suit her.

‘I am used to the Minnesota and Colorado hard snow,’ the American told reporters. ‘This snow doesn't like me.’

Vonn won gold in the women's downhill and bronze in super-G, but suffered her third non-finish in five events in the slalom as she straddled a gate on the first run.

On Cypress Mountain, Nicolien Sauerbreij of the Netherlands raced through a driving rainstorm and fog to win gold in parallel giant slalom snowboarding by a slim margin.

‘I knew I was good but to win under these conditions - unbelievable,’ the 30-year-old Dutchwoman said.

A pregnant snowboarder, Amelie Kober, braved those conditions too, but decided to withdraw after she fell.

Norway's men powered through a snowstorm to win the 4x7.5km biathlon relay, with anchorman Ole Einar Bjoerndalen moving within one medal of the leading Winter Olympic tally of 12.

In the men's four-man bobsleigh, the American Night Train bob piloted by Steve Holcomb led after two runs, fuelling hopes of a first US men's gold on Saturday in the heavyweight sliding event since 1948. 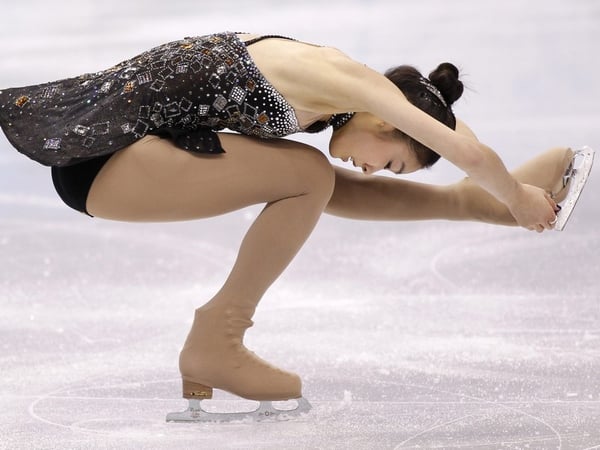