Canada's hockey women delivered the first half of what the host nation hopes will be a gold medal double when they beat the USA 2-0 at Canada Hockey Place on day 14 of the Vancouver Games.

Marie-Philip Poulin scored twice in the first period to put Canada firmly in command and, roared on to victory by an ecstatic Canada Hockey Place crowd, they never looked in danger of surrendering their lead.

There were jubilant scenes at the end as Canada celebrated its eighth gold of the Games and looked forward to another golden moment from the men's team who are in semi-final action on Friday.

The USA had beaten Canada in the last two World Championship finals making an Olympic gold on home soil against their southern neighbours all the sweeter.

Canadian goalkeeper Shannon Szabados justified her selection for the final after the duties had been shared among all three keepers in the squad throughout the tournament.

‘It feels unbelievable, I can't really put it into words, it hasn't sunk in yet,’ Szabados said following her 28-save shutout of the Americans.

The teams were level at 2-2 at the end of the third period but Rantamaki tucked home from close range two minutes and 33 seconds into overtime to secure a 3-2 win.

Heidi Pelttari fired Finland ahead, Maria Rooth levelled for the Swedes and Michelle Karvinen restored the Finns' lead in a busy second period.

Danijela Rundqvist scored in the third period to bring the Swedes level but Rantamaki had the last word.

The host nation stayed on course for more golds as Canada's men and women's curlers both moved into the finals of their events.

The women, skipped by Cheryl Bernard, delighted the Vancouver Olympic Centre crowd by joining the Swedes, who beat China 9-4, in Friday's final by edging out Switzerland 6-5 in their semi-final.

‘It was a tight game,’ Bernard said. ‘It was probably not my most stellar game. It seemed the stress crept in finally.

‘We need to realise there's still more work to do. We can't sit back and say that's good enough, because it's not.’

Kevin Martin's men's curlers later defeated Sweden 6-3 to set up a final on Saturday with Norway, 7-5 winners over Switzerland.

South Korea's Kim Yu-Na completed a flawless free skate to claim Olympic gold in the ladies' figure skating, but the night belonged to Canada's Joannie Rochette who won bronze less than a week after the death of her mother.

Yu-Na took a big lead from Tuesday's short program into the free and extended her advantage after a perfect four-minute performance for a world record total of 228.56, way ahead of Japan's Mao Asada who took silver with 205.50.

Rochette followed, recovering after an early slip to total 202.64 and take the bronze medal. The Canadian could barely hold back tears as the Pacific Coliseum rose to acknowledge her bravery.

Norway claimed their sixth gold of the Games in the cross country skiing 4x5km relay classic.

Germany's Viktoria Rebensburg was stunned by her surprise gold in the women's giant slalom at a foggy Whistler Creekside.

Rebensburg, 20, was lying sixth after the first run but grabbed the lead after completing her second run in one minute, 11.64 seconds for a combined time of 2mins, 27.11secs.

‘Unbelievable,’ said a shocked Rebensburg. ‘I don't know what to say. I think I have to celebrate.’

Slovenia's Tina Maze bagged another silver medal to add to her earlier one in the Super-G. She was 0.12 seconds behind after a second run of 1:11.76.

Elisabeth Goergl of Austria, leading after the first run, had to settle for another bronze to match the one she won in the downhill after a second run of 1:12.13 gave her a combined time of 2:27.25.

Defending champion Julia Mancuso skied a quick second run - 1:11.24 - but had too much ground to make up after her first run and was back in eighth place.

The USA struck gold and silver through Bill Demong and Johnny Spillane respectively in the Nordic combined individual event.

The bronze medal went to Austrian Bernhard Gruber, who led after the ski jumping phase but was overhauled by the American pair on the 10km cross country run.

At Cypress Mountain, Belarus picked up its first gold medal of the Games when Alexei Grishin won freestyle skiing's men's aerials event with a combined score of 248.41 from Jeret Peterson of the USA (247.21) and China's Zhongqing Liu (242.53).

Canada's Kyle Nissen had led the 12-man event by more than six points after the first jump but with the final second jump of the night he mistimed his landing slightly and had to settle for fifth place. 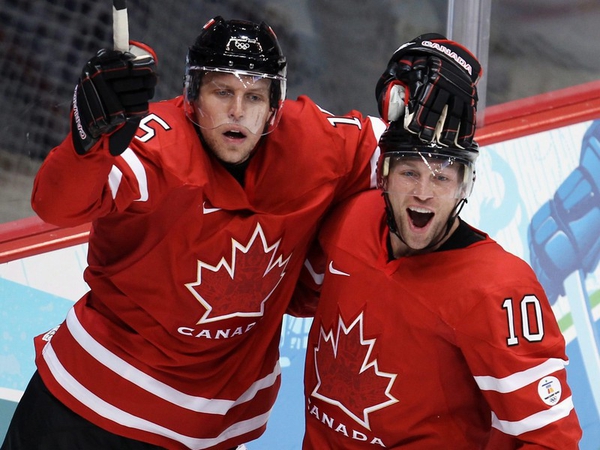