Max Verstappen need not score another point to be Formula One champion if Lewis Hamilton also draws a blank in Abu Dhabi next weekend and the risk of a thrilling season ending in collision and controversy is real.

The two rivals are now level on points after Sunday's chaotic race in Saudi Arabia but Red Bull's Verstappen is ahead of Mercedes' seven times world champion 9-8 on race wins.

1996 world champion Damon Hill is wary of history repeating itself and suggested the sport's governing body should send a clear warning.

"There is a precedent that was set in the championship in 1997 where (Michael) Schumacher's points were taken away from him," he told Sky Sports television viewers in his role as a pundit.

"So if we do have a (collision) situation, I think the FIA should make the teams and drivers know in advance what they are likely to do. Will they take points away? What's the penalty?"

Ferrari's seven times world champion Schumacher and Williams' Jacques Villeneuve went into the final race of 1997 at Jerez in Spain with the German leading the Canadian by a single point.

The pair collided while battling for the lead, with Schumacher forced to retire and later stripped of all his points for the season for what was seen to be an attempt to take out his title rival. Villeneuve finished third and was champion.

In 1994, Hill and Schumacher battled for the crown at the final race in Adelaide, with the Briton also a point behind the German.

Schumacher hit the wall and then collided with Hill as the Williams tried to overtake, with both drivers retiring and the German taking his first title. Stewards declared it a racing incident.

Hill did not suggest Verstappen would resort to dirty tricks but saw similarities with Schumacher in his aggressive and take-no-prisoners driving style.

"There are some people who drive with absolutely no compromises whatsoever. And I think Max is one of those people," he said.

"He's very skillful and he's brilliant and it's exciting to watch. I think Lewis, who has to deal with that, is now very cautious - he's not intimidated but he's very wary of Max and probably rightly so." 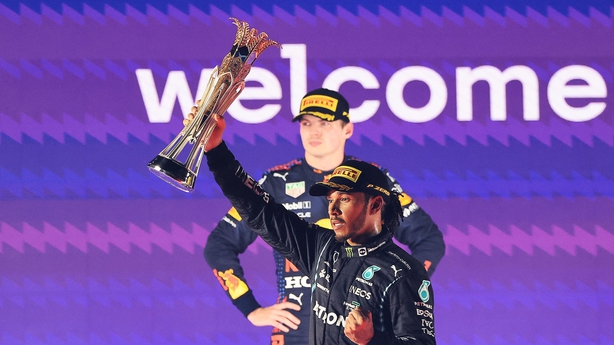 The two contenders have collided several times already in their battle of the generations this season and did so again in Jeddah, when Verstappen gained an advantage by going off track and was told to let Hamilton take the lead.

Hamilton was taken unawares, going into the back of the Red Bull and accusing 24-year-old Verstappen of 'brake-testing' him.

The pair also collided at the Italian Grand Prix, with Verstappen's car ending up on top of the Mercedes and both out of the race, as well as at Silverstone when the Red Bull driver crashed heavily and Hamilton won.

"Max is pushing everything to the limit," said Hill. "It's for the world title, and both guys want it massively and there's always going to be tears."

"The quicker car with the quicker driver should win the championship, and not by taking each other off," he told reporters.

"I would hope today's race has enough repercussions that everybody is going to learn from it and adapt for the final race in Abu Dhabi."