Michael Schumacher had just gone to the aid of a friend when he sustained serious head injuries while skiing in France, his spokeswoman revealed on Tuesday.

Sabine Kehm also claimed that a journalist dressed as a priest had apparently tried to gain access to Schumacher's room in the French hospital where he is being treated.

On a day when doctors at the University Hospital of Grenoble said Schumacher's condition had improved slightly, Kehm described details of the accident according to what she had been told by eyewitnesses.

In quotes reported by German newspaper Die Welt, Kehm said: "Many people who were there have described the situation to me.

"Michael had helped up a fallen friend shortly before and was therefore not going at high speed.

"He then went over a boulder, which he had not seen, and as a result lost control. That he then hit his head against another rock is a great misfortune."

A statement from Schumacher's family on Monday had asked the press to respect their privacy but this has seemingly been ignored.

Kehm added: "Apparently a journalist dressed as a priest tried to gain access to Michael's room. I wouldn't have ever imagined something like this could happen."

Seven-times Formula One world champion Schumacher remains in a critical condition and is still in intensive care after the accident in the resort of Meribel on Sunday.

However, the medical team were able to perform surgery overnight which released some of the pressure on Schumacher's brain and removed a dangerous haematoma.

Doctors said on Monday that the accident would certainly have killed the 44-year-old German if he had not been wearing a helmet.

The surgeons admitted to being "surprised" at the improvement in Schumacher's condition, with a scan on Monday afternoon giving them the go-ahead to perform a procedure they had not expected to be able to safely execute.

"Late on (Monday) evening a new brain scan was carried out and there was a slight improvement," Jacqueline Hubert, the director general of the hospital, said.

"The scan allowed us to suggest we could have a new intervention (on the brain) and that took place overnight. A new scan was carried out this morning and this shows slight improvement."

"That scan showed a few signs that were relatively stable. There were no signs that implied there was a worsening.

"Talking to my colleagues, we felt at the moment that it was possible, taking into consideration his state had slightly improved, to carry out a surgical intervention that we had not thought possible.

"It allowed us to treat in a more radical fashion to relieve intra-cranial pressure.

"This was carried out in the night. This allowed us to do a new scan and see new images and see the haematoma has been evacuated in a good fashion.

"We have seen a few signs to show the situation is better controlled than it was (on Monday)."

It later emerged that the surgery on Schumacher, a winner of 91 Grands Prix during a stellar career, had taken place at 10pm local time on Monday.

While Schumacher's condition had improved, the doctors admitted they could not yet say that he was out of danger and that the coming hours and days were still crucial.

"The situation is better controlled than it was (on Monday)," they added.

"We are unable to say that he is out of danger, however, we now have slightly more, we've gained a bit of time with regards to development.

"But once again, the coming hours are still critical hours with regards to our treatment stategy. In intensive care things can go well or badly very quickly. We're just gaining a bit of time."

They added: "We are still concerned and we are still worried. We can't tell ourselves that we have won.

"There are highs and lows and the situation is slightly better than (Monday) but we must be realistic and the whole family is well aware of the situation and very sensitive to everything that is done."

Doctors also confirmed that Schumacher remains in a medically-induced coma and that there is no way to predict his future condition.

"He still remains in a coma and for the moment there is absolutely no question of evaluating him from a neurological point of view and seeing how he will be when he wakes up," they said.

"At the moment we still have some other problems, some other treatments that have to remain.

"He is in a state of hypothermia and he's kept in an artificial coma. How long could that last? It will last the time that we judge to be necessary."

It was also confirmed that Schumacher will remain in Grenoble for the foreseeable future while he continues to be treated. 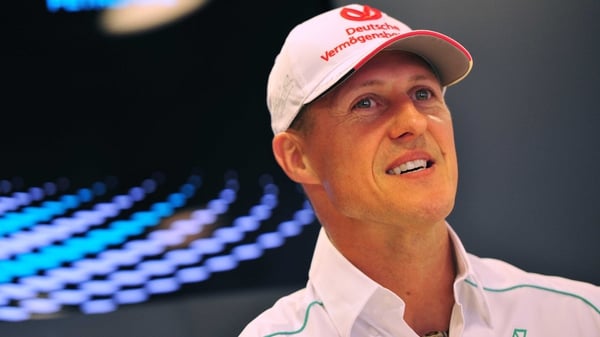