For a journey that began in the last decade and picked up momentum from 2015, the introduction of parity of state funding between male and female GAA players has been a long time coming.

Back in May, Minister of State for Sport Jack Chambers confirmed that the model, which saw male players receive €1,200 from the state compared to just €400 for female players, had to change as he couldn't "stand over or defend that inequality".

A Government briefing yesterday confirmed an increase of €4.3m to €96.2m in funding for Sport Ireland.

Also included is the expected, but long awaited, introduction of parity of funding between male and female inter-county GAA players from next season.

Former Tyrone footballer Gemma Begley, the Player Representation & Engagement Manager with the GPA, welcomed the recognition from both the government and Sport Ireland.

"There has always been a recognition that alongside team costs, that the players were out of pocket themselves," she told RTÉ Sport.

"That’s where the evolution of the female grants have come from. Previously it was just team funding, but now we are able to help players as well.

"It was perfect timing in a way with the amalgamation of the GPA and the WPGA. It’s written into the new association that one of the key pillars is to deliver equality, of recognition of investment, so it’s something we are very passionate about.

"We’re delighted to see that recognised by the State and Sport Ireland."

The Ladies Gaelic Football Association and Camogie Association are separate entities to the GAA and have struggled to match the men's body's provision of training expenses.

GAA inter-county players receive 50 cent per mile for travel - down from 65c per mile before the pandemic. The LGFA and Camogie Association did not pay travel expenses before the Covid-19 outbreak but this year both provided 30c per mile for matchday travel. 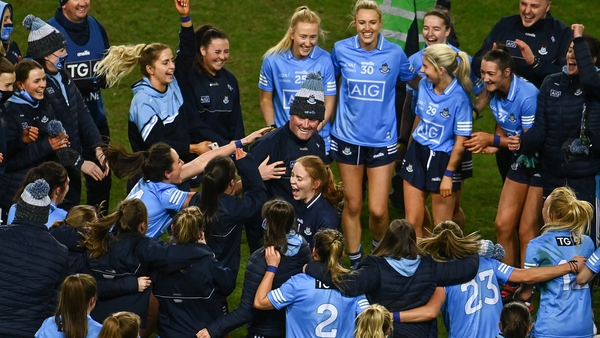