Rob Downey will visit Belfast for the first time this weekend.

His Cork side takes on Antrim at Corrigan Park on Saturday in the All-Ireland preliminary quarter final.

"I only watched it at home, but just looking on they're a very well-balanced side. Both their backs and they've some fantastic forwards. Household names like Neil McManus and a couple more.

"And I suppose going up there as well it will be a hostile enough environment. It's a small field and I think tickets sold out in an hour so it'll be packed out as well.

"Their confidence will be up as well because of obviously after the Joe McDonagh Cup Final and they'll bring a big support. We need to be on our game if we're to turn them over. "

Downey says there will be absolutely no complacency in the Antrim camp.

"We can't really look too far forward otherwise we'll slip up. To be honest, all our focus and preparation has been on Antrim the last number of weeks. We just hope we can get over the line.

"At the end of the day Antrim deserve to be in the All-Ireland series. They won the Joe McDonagh which was a fantastic game that could have gone either way. As I said, they have some brilliant players. Keelan Molloy, Neil McManus, their free' taker (Conal Cunning) is another fantastic player. 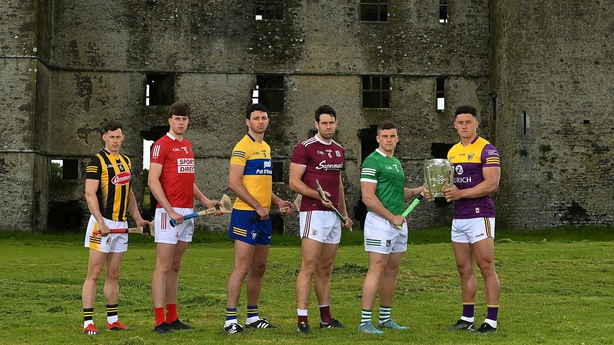 "We'll have our work cut out for us and if you even only look at the Westmeath-Wexford match recently, you wouldn't have expected Westmeath to draw with Wexford. So, yeah, we need to be on our game big-time to avoid a slip-up."

Cork have enjoyed a serious reversal of fortune in this year's championship.

They dragged themselves off the ropes with fine back to back wins over Waterford and Tipperary.

"For us, we felt we were doing good things in games but we just probably weren't coming together for the 70 minutes. Our backs were to the wall against Waterford and we could maybe play with a bit more abandon while sticking to the game-plan and process too.

"Thankfully it just came together for us on the day and that gave us a bit of confidence. Going on to the Tipp game then it was more or less the same thing. Luckily enough we came third in Munster and here we are now. "

The character of the Cork team was questioned more than once the week before that do or die game with Waterford.

But it didn’t make any impact on Downey.

"Confidence was alright. Like I say, we had two poor games against Limerick and Clare back-to-back, we made mistakes that really cost us. In the Limerick game, we had two sucker punch goals. A few poor mistakes. But there’s a huge confidence in our group amongst the players and management.

"Management have always instilled that in us. For us it was just about our timing, waiting until a performance came out. And thankfully it did when the pressure was on in Walsh Park."

Now they look to be in a good place - streamlined and ready to push for more.

"Yeah, there’s a nice buzz around the place. Obviously there was doom and gloom after losing the first two rounds, and it was nice to put two matches back-to-back, with two good performances.

"So yeah, confidence is there amongst the group. With the long evenings and stuff, it is nice to get out to training. There’s a bit of a buzz around the place."

And that resounding win over Tipp?

"Yeah it was very pleasing to be honest with you. We’d have liked to be able to do it for the whole thing. That was just the way it fell. Look, being consistent every week is what every team wants to achieve, and for us we weren’t the first two weeks, and thankfully from just training hard and staying tight with each other, we were able to achieve that level of consistency that brought us two wins on the bounce."

In the process of it all Downey’s Glen Rovers clubman Patrick Horgan became the highest scorer in championship history. Downey wasn’t one bit surprised.

"In fairness it’s unbelievable. For me he’s one of the best players to ever play the game. I might be a bit biased being a Glen man but he’s definitely in that conversation anyway. It’s an unbelievable record, it’s a testament to the amount of work he’s put in over the years.

"I mentioned that his work ethic, every day he’s down in the Glen Field, every single day pucking around and always working on himself, making sure he’s in tip-top condition. That achievement is nothing more than he deserves."