Colin Ryan hit an injury time equaliser from a pressure free as Clare earned a 0-18 to 1-15 draw in an eventful Allianz Hurling League Division 1A clash at Ennis.

Despite seven Tony Kelly first half frees, Galway were still 0-09 to 0-08 in front at the break.

Clare had been reduced to 14 men in the 30th minute when Shane Golden was sent off following an off the ball altercation with Iarla Tannian.

After the restart Galway were buoyed when Cathal Mannion burst clear to goal, but Clare fought back and the spoils were divided.

It was tight and tense throughout a scrappy opening period which featured five yellow and one red card.

Golden was harshly dismissed in the 30th minute for his part in a brief clash with Tannian.

That was one of several controversial incidents in the first half as Galway were aggrieved at a string of frees awarded to the home side.

Tony Kelly was sharp for the Banner rifling over seven points from frees taking advantage of the decisions which went Clare's way.

Early on two Kelly frees nudged Clare ahead before Galway reeled off five points without reply.

Clare responded with four in a row themselves three from Kelly and one neat effort from Donal Reidy.

It remanded keenly contested until the interval as the teams were deadlocked at 0-07 each five minutes before the break.

Golden was then given his marching orders by referee Diarmuid Kirwan and Galway went in with a slender 0-09 to 0-08 advantage as Cathal Mannion clipped two fine scores.

In the third quarter Clare were efficient and effective as Kelly continued to score frees.

Kelly scored three consecutive frees, and Galway trailed by a point when they pounced for a 52nd minute goal.

A smart turn by Mannion made space and the corner forward drilled the sliotar to the back of the Clare net.

Davy Fitzgerald’s All Ireland champions’, though, introduced Conor McGrath and Ryan, who both contributed handsomely in the closing stages.

Galway had a glorious chance to pocket a second goal, but Patrick Kelly deflected Niall Burke’s shot over for a point.

Only one point separated the protagonists in injury time when Kirwan awarded Clare a disputed free and Ryan was ice cool converting the free from an acute angle. 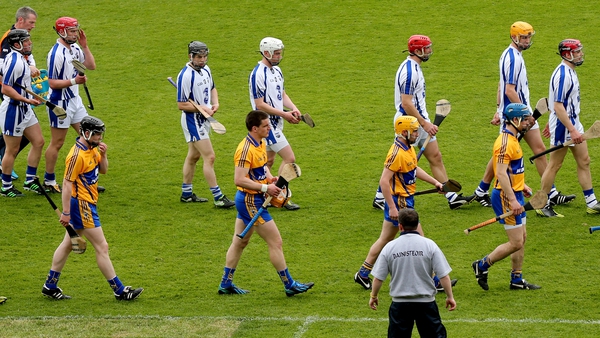