Wexford surged back to joint-second in Allianz Hurling League Division 1B with a hard-fought 2-21 to 1-18 home victory over 14-man Laois at Wexford Park.

A terrific team goal converted by Gary Moore helped Wexford to a 1-10 to 0-10 half-time lead, with Laois' Charlie Dwyer receiving a straight red card just before the interval.

The midlanders fought back well and John Purcell's superb 43rd-minute goal had them back within a point. However, a late goal from Shane Tomkins sealed the Wexford win.

With the wind advantage in the first half at Wexford Park, Laois rattled off the first three points of the game, however in a free-flowing opening the home side replied with four points to go ahead.

A brilliantly crafted goal by Wexford midway through the half put them 1-04 to 0-04 in front.

Ian Byrne, who had a fine game in the half-forward line, delivered a long ball into the corner, veteran Rory Jacob collected, drew the cover and passed to Moore who made no mistake with a clinical finish.

Laois had impressive defenders in John Delaney and Joe Fitzpatrick and they kept the O'Moore men well in the contest up until near the interval.

However, just before half-time, Laois half-forward Dwyer, who had already bagged three points from play, received a straight red card for an off-the-ball offence.

Despite the loss of Dwyer, Laois responded well and they got right back into the contest with a cracking goal in the 43rd minute, Purcell striking Stephen Maher's cross first time to the back of the net.

The sides were level twice during the second period, but a run of four unanswered points for the Model men between the 58th and 62nd minutes looked to have sealed the points.

Any late doubts about a home victory were dispelled with two minutes to go when impressive centre-forward Tomkins scored Wexford's second goal from close range after a tidy pass from Conor McDonald. 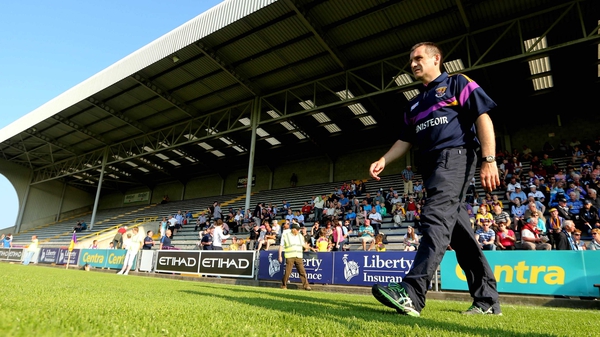