Clare struck ten unanswered points in a 12-minute second half spell as they beat Cork 1-22 to 1-16 at Páirc Uí Rinn.

When Pat Horgan pointed for Cork in the 46th minute, they led by 0-15 to 0-10, but an excellent comeback, with Colin Ryan and Tony Kelly among the scores, propelled Clare to victory and top spot in Allianz Hurling League Division 1A.

Cork had been far better in the first half, Horgan and Lorcan McLoughlin both shining.

But Clare found an extra gear or two in the the second period as they first drew level with their opponents and then powered ahead, the free-taking of Colin Ryan impeccable with Shane O’Donnell’s 63rd-minute goal more or less ended any lingering hopes Cork had of making it two wins from their first three games.

Colin Ryan finished with 12 points, Tony Kelly and Conor Ryan also getting their names on the scoresheet, while Patrick Donnellan, Brendan Bugler and Patrick O’Connor were outstanding in the half-back line in the second half, making life very difficult for the Rebels attack.

It was all a far cry from the opening 35 minutes when Cork looked very comfortable at times.

Though Colin Ryan put Clare ahead with the opening score, Cork would lead thereafter, Horgan on target with frees while McLoughlin added three points from midfield.

It would have been more but for Patrick Kelly’s save from Stephen Moylan. 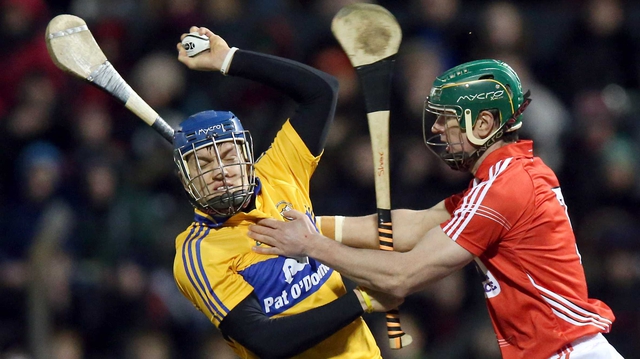 After Tony Kelly gave Clare a first point from play, they began to eat into the lead more.

Nevertheless, Paudie O’Sullivan’s point in first-half injury-time meant that Jimmy Barry-Murphy’s side possessed a 0-12 to 0-07 interval advantage, and early second half scores from Seamus Harnedy and Horgan meant that the lead was six, 0-14 to 0-08.

Crucially, however, Clare were not as reliant on Colin Ryan for scores as they had been, Conor Ryan and Tony Kelly getting in on the act, though it took a wonderful block from Donnellan to deny O’Sullivan a goal on 44 minutes.

Once Clare got going there was not stopping them, though.

Kelly levelled on 51 minutes before Colin Ryan put them in front, and though Paudie O’Sullivan had another goal chance, Patrick Kelly was again equal to it.

Nicky O'Connell added another for Clare and Cork were struggling, as indicated by an uncharacteristic Horgan miss.

Substitute Darach Honan also scored before Colin Ryan got his 12th of the match.

Substitute Luke O’Farrell nabbed a late goal, but it was far too late to inspire to a Cork comeback and the Banner took the points home.