Galway are through to their first All-Ireland Senior Hurling Championship final since 2005 after overcoming Cork by 0-22 to 0-17 at Croke Park.

The Rebels led for much of the first half, with captain Pat Horgan and Paudie O'Sullivan scoring well.

But it took a late Horgan free to level matters at 0-11 apiece for half-time as Galway, with Joe Canning scoring 0-07, finished strongly.

The Leinster champions edged a pulsating second period, with their defence improving and Canning and Damien Hayes hitting crucial scores.

There was a degree of rustiness to Galway, who were last in action in that historic provincial final win over Kilkenny five weeks ago, but they threw off the shackles after the break to move a step closer to All-Ireland glory.

Cork emptied their strong bench in a bid to overhaul Anthony Cunningham’s men. But Johnny Coen and Fergal Moore were rock solid in the Tribesmen’s rearguard, and the firepower of Canning, who finished with 0-11, was hugely influential in this goalless encounter.

Galway were unchanged from the Kilkenny game, apart from the late withdrawal of Cyril Donnellan who has been nursing a chipped bone below his elbow.

Donnellan’s place in attack went to James Regan and his team-mate Damien Hayes picked off the opening point after just 27 seconds.

Cork had the breeze at their backs and captain Pat Horgan brought them level from a free, before Jamie Coughlan fastened onto a long Anthony Nash puck-out to make it 0-02 to 0-01.

Fergal Moore ferociously clattered into Lehane to prevent the youngster getting a clear shot, giving a glimpse of the intensity that Galway played with against Kilkenny.

Clever stick work allowed Cian McCarthy add to Cork’s lead, but an unchallenged Pa Cronin shot a poor wide and a Joe Canning free brought it back to 0-03 to 0-02.

Niall Burke was wayward with a couple of efforts and Nash was equal to an opportunist, low-slung free from Canning after Hayes’ pace had caused concern for the Rebels’ rearguard.

A loose clearance from Moore gifted a 10th minute point to Paudie O’Sullivan, with both defences coming under incessant pressure.

The gap was down to one again following a long range Canning free, and Regan announced himself with a tremendous leveller, with Niall Donoghue and Iarla Tannian doing the donkey work.

Cork nipped ahead again thanks to a Horgan free and he tagged on another in the 18th minute after his own fine catch in midfield. O’Sullivan, moving extremely well, then cancelled out a Canning free to maintain the two-point advantage.

Profiting from a short puck-out tactic, Galway swooped downfield and Conor Cooney’s clever centre teed up Canning for his first point from play.

Cork goalkeeper Nash did well to thwart Cooney at the expense of a 65’ which Canning lofted over, bringing the Leinster champions level in the 26th minute.

But Galway were unable to fire on all cylinders, with robust defending from the likes of Seán Óg Ó hAilpín and Eoin Cadogan forcing mistakes - David Burke hit his side’s fifth wide.

Horgan nudged Cork back in front from a textbook free - his fourth of the contest - and Galway’s wastefulness continued with Tannian’s spooned attempt drifting wide.

Barry-Murphy’s charges were much more economical with their possession, an example of which saw corner forward O’Sullivan collecting his third point from play.

In timely fashion, Galway upped the tempo in the closing five minutes of the first half. David Burke’s persistence paid off with a deserved score and Canning lobbed over his sixth point from the left.

Hayes darted through the middle and set up Canning for the lead score at 0-10 to 0-09, but Cork replied swiftly with Luke O’Farrell getting off the mark.

David Burke doubled his tally with a pinpoint shot from near the left sideline, before Horgan had the final say in injury-time - firing over a terrific free from distance to tie the sides at 0-11 apiece.

Horgan clipped over a close range free after O’Sullivan was brought down early in a sun-splashed second period, and as Galway pressed for an equaliser a first-time pull from Cooney flew narrowly past Nash’s far post.

Canning won a free which he sent over to level the sides for the seventh time, and a trademark burst from Hayes saw the Portumna flyer move Galway ahead.

Two sweetly-struck passes from Andy Smith and David Burke played in Canning for his ninth of the day and suddenly Anthony Cunningham’s men had a two-point lead.

Tigerish play from Canning, who was drawing more and more Cork defenders, laid the platform for a Niall Burke point, before Horgan rallied his troops with a well-hit effort from play.

But there was a sense that Galway had found an extra gear, with their two-man full-forward line of Canning and Hayes keeping the Cork defence more than occupied.

Niall Burke drilled over his second, much to the delight of the Galway contingent in the 41,537 attendance, and the same player produced a brilliant save from Nash as the Tribesmen went for the jugular.

Canning converted the resulting ‘65’ and Hayes slotted over shortly afterwards, in response to a score from Cork substitute Darren Sweetnam.

Cork, aided by some fresh legs, gained some precious momentum as a Cronin snapshot cleared the crossbar and substitute Cathal Naughton weighed in with a rousing effort from the left.

The margin was down to two again, 0-18 to 0-16, as the hour mark approached. Galway responded with a point from Regan, although their wides tally soon increased to ten.

The pressure was really on and Cork, as determined as ever, showed no signs of falling away. Net minder Nash thumped over a long range free, only for Andy Smith to reply in the next attack.

Cork were hanging in there despite wides from Nash and Niall McCarthy, while a strike from O’Sullivan on Canning’s hand produced the semi-final’s only yellow card.

After receiving treatment, Canning split the posts with another accurately-struck free, stretching Galway into a four-point lead as the signal came for three minutes of injury-time.

Cork desperately craved a goal but the Galway defence stood up to the task, particularly the heroic Coen and Moore, and a final point from Hayes sealed the deal for the westerners. 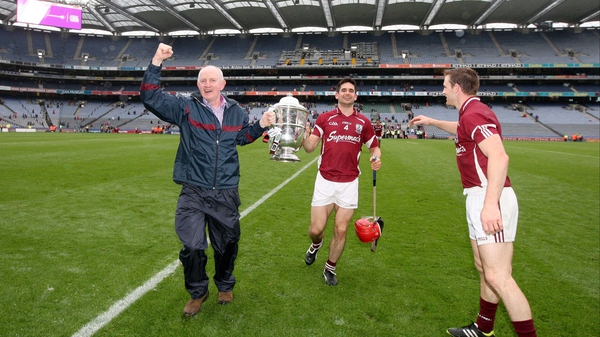