Munster champions Tipperary staged a remarkable comeback to break Limerick hearts, 2-20 to 1-19, in a thriller at Semple Stadium.

Limerick seemed set for a shock win when they built on a 1-9 to 1-8 interval lead by hitting six points without reply against the wind in the opening 13 minutes of the seconds-half.

But the All-Ireland finalists never panicked and Tipp clawed their way back into contention and hit the front seven minutes from time when Brian O’Meara flicked home a goal. Tipp powered on from there to set up a Munster semi-final with Cork.

Limerick opened at a blistering pace with teenage debutant Shane Dowling leading the way as he landed four points, two of them from play, in the opening ten minutes.

Tipperary captain Paul Curran had opted to play against the wind and the Limerick fans in the crowd of 22,068 must have been given great hope by their impressive start, with only Tipp’s only response being a long-range effort from Thomas Stapleton.

But Tipperary refused to panic, even when Eoin Kelly missed a couple of frees, and Pa Bourke and the hard-working Brian O’Meara reduced the deficit.

Then John O’Brien found O’Meara in space and rather than pick off a point the full-forward found the unmarked Bourke who drove low into the bottom left corner to level the match at 1-03 to 0-06, after Dowling and Graeme Mulcahy had increased Limerick’s lead.

A minute later Mulcahy, having been denied by Brendan Cummins, blasted to the net to put Limerick 1-08 to 1-04 in front.

The response from Tipp against the wind was good with O’Meara getting his second point as they hit four on the spin as Bourke, Kelly and McGrath found the range, although Limerick led 1-09 to 1-08 at the break when Sean Tobin pointed in stoppage time.

Tipp were clearly rattled as Kevin Downes, Dowling, David Breen, Mulcahy, Sean Tobin and Conor Allis all found the range to lead by 1-15 to 1-08 after 48 minutes.

But Pa Bourke settled them with a couple of points and they got the margin down to two before O’Meara struck for the decisive goal to break Limerick hearts in a gripping contest. 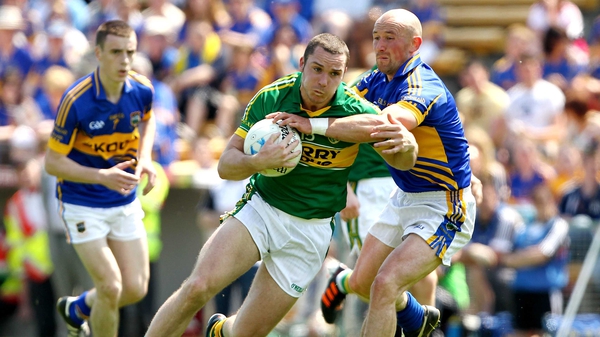