Ireland's new-look side put in a fearless performance but ultimately came unstuck against the Netherlands at a rocking Wagener Stadium, putting it up to the reigning World Cup, Olympic and European champions.

In the end, the Dutch ran out healthy winners with their set piece work - two corner goals, two from strokes - proving pivotal.

But Ireland were right in the contest in the third quarter when Róisín Upton’s long drag found the net. It was their first goal in their last eight meetings with the Oranje, dating back to 2005, cutting the gap to 2-1 for a spell.

However, a rocket from Sabine Plonissen was quickly followed by two more goals and the Dutch were out of sight.

Nonetheless, coach Sean Dancer can take plenty of heart from a tie which saw Caoimhe Perdue, Charlotte Beggs, Katie McKee and Christina Hamill all make their international debuts in an orange cauldron.

Ayeisha McFerran put in a huge performance while the corner defensive team shone throughout.

In the early phases, the world number one side - buoyed by a full house, buzzing on happy hardcore pre-match music - set their stall out early with Felice Albers and Lidewij Welten going close.

They were denied by the outstanding work of McFerran who made numerous full-length saves while she was backed up by Sarah Torrans' brave running down the barrel at corner time.

Sarah McAuley coolly cleared a number of dangerous moments while, at the far end, Torrans fired into the side-netting from Ireland’s best moment.

As such, the Netherlands were unable to make any of their seven first-half corners count due to the compact lines being run. They did, however, eke out a stroke from an intricate move with Yibbi Jansen slipping the ball under her arm to Maria Verschoor who was upended.

Frédérique Matla stepped up and while her shot was not the cleanest, it found the left corner. It remained that way through to the second half when the Dutch stepped up the pressure.

Yibbi Jansen doubled the lead in the 35th minute from a ripping drag-flick down the glove-side before Ireland got right back into the contest.

Michelle Carey’s driving runs were a feature throughout and she won the set piece from which Upton added another to her international scrapbook.

But just as they sniffed an upset, the Dutch broke again and won a corner which Sabine Plonissen swept home from the top of the D.

Matla converted another stroke with seconds to go in the third quarter after Albers was felled for 4-1. And the victory was completed when Verschoor unleashed a perfect backhand shot to the bottom left corner seconds into the final quarter.

Ireland now have two rest days before their vital Tuesday meeting against Chile. The South American side lost 4-1 to Germany. 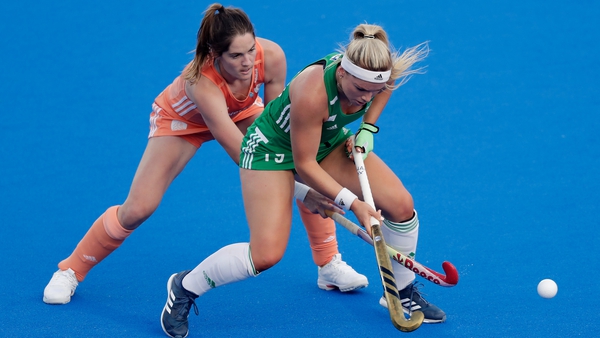